In the early morning of Thursday 8 October 2020 and under a grey overcast sky, British Airways Boeing 747-436 G-CIVB took off at 08:39 local time (07:39 UTC) from RWY 27R at London Heathrow airport (LHR). Operating as flight BA400, the aircraft was ferried to Cotswold Airport (GBA) (also known as Kemble aerodrome) in Gloucestershire.

While G-CIVB immediately set course for Cotswold Airport near Kemble, G-CIVY was allowed say one last goodbye to here home at Heathrow. The aircraft performed a low level flyby over RWY 27L at London Heathrow at an altitude of just 750 feet, before continuing to St. Athan Airport. 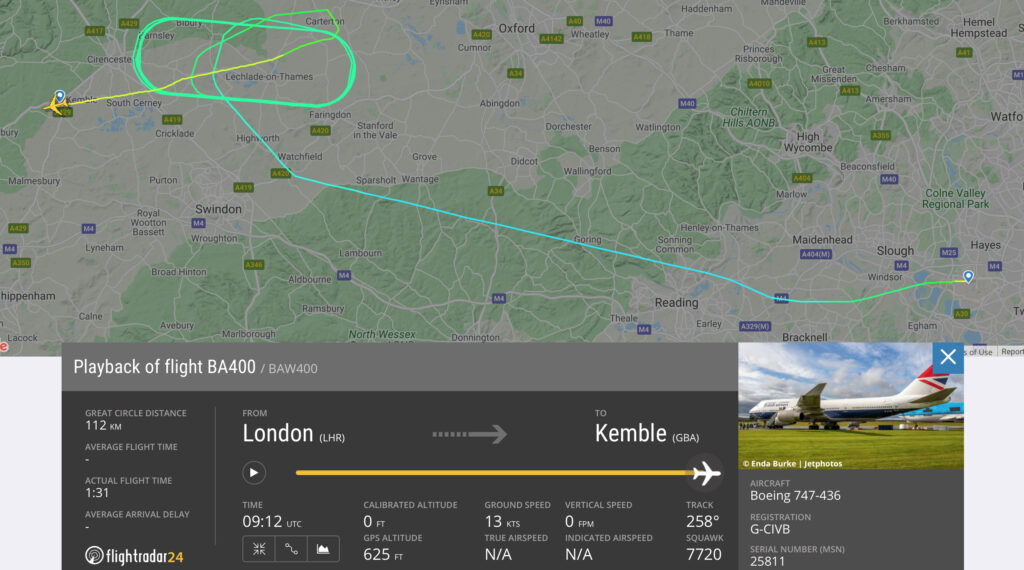 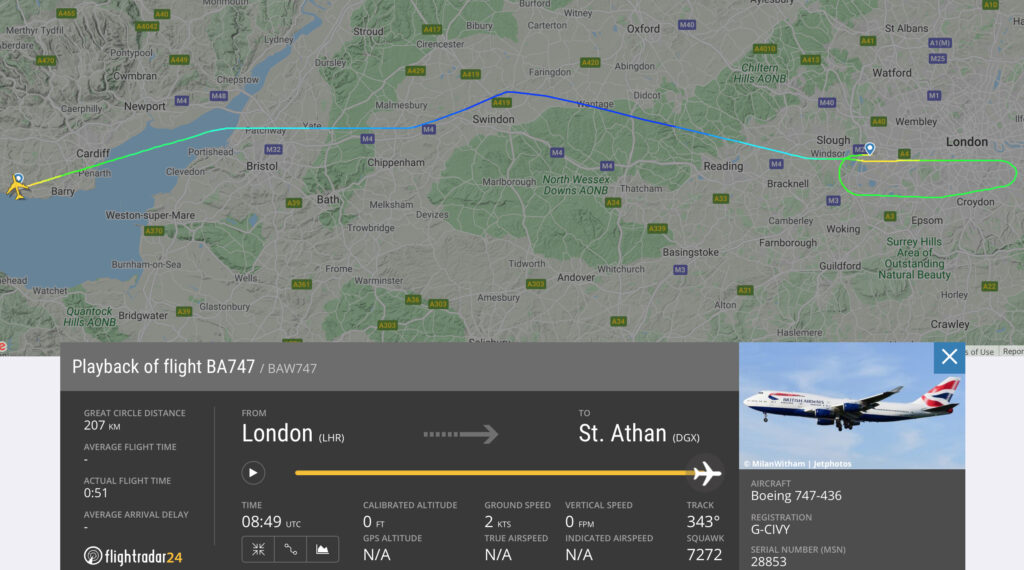 At 09:31 local time (08:31 UTC) and after a short ferry flight, Boeing 747-436 G-CIVY made a smooth and uneventful landing on RWY 26 at St. Athan Airport, a former military airfield in Wales. At that same time, Boeing 747-436 G-CIVB was still flying a holding pattern east of Cotswold Airport, due to poor visibility at the airport. More than 30 minutes later, G-CIVB made the final landing of a British Airways Boeing 747 Jumbo Jet as she landed on RWY 26 at Cotswold Airport. Cotswold Airport is also a former RAF airfield and was previously known as Kemble Airfield or RAF Kemble.

Both aircraft were initially presumed to be dismantled, as has been the case with other former British Airways Boeing 747-400 aircraft. At moment of writing there were some rumours that G-CIVB might be preserved at Cotswold Airport.

British Airways Boeing 747-436 G-CIVB was delivered to the airline on 15 February 1994 and was retired on 8 September 2020. Its last passenger flight was on 6 April 2020, operating a British Airways flight from Miami to Heathrow. The aircraft operated 13.398 flights, flew for 118.445 hours and flew a total distance of 59 million miles. It was painted in the airline’s heritage ‘Negus’ livery, to commemorate the airline’s centenary in 2019.

British Airways Boeing 747-436 G-CIVY was delivered to the airline on 29 September 1998 and was retired on 8 September 2020. Its last passenger flight was on 20 March 2020, operating a British Airways flight from Chicago to Heathrow. On 5 April 2020 it operated its last freighter flight from Dallas to Heathrow. The aircraft operated 11.034 flights, flew for 90.161 hours and flew a total distance of 45 million miles. It was painted in the airline’s current ‘Chatham Dockyard’ livery.

In June 1989, British Airways received G-BNLA, its first Boeing 747-400, straight from the Boeing factory in Everett near Seattle in the United States. This was the final type of the iconic aircraft that would be operated by the British airline. In total, the airline received fifty-seven Boeing 747-400 aircraft. The airline operated the biggest Boeing 747 fleet in the world and the Jumbo Jet operated on many of the airline’s long haul destinations, including New-York, Los Angeles, San Francisco, Hong Kong, Cape Town and Sydney. 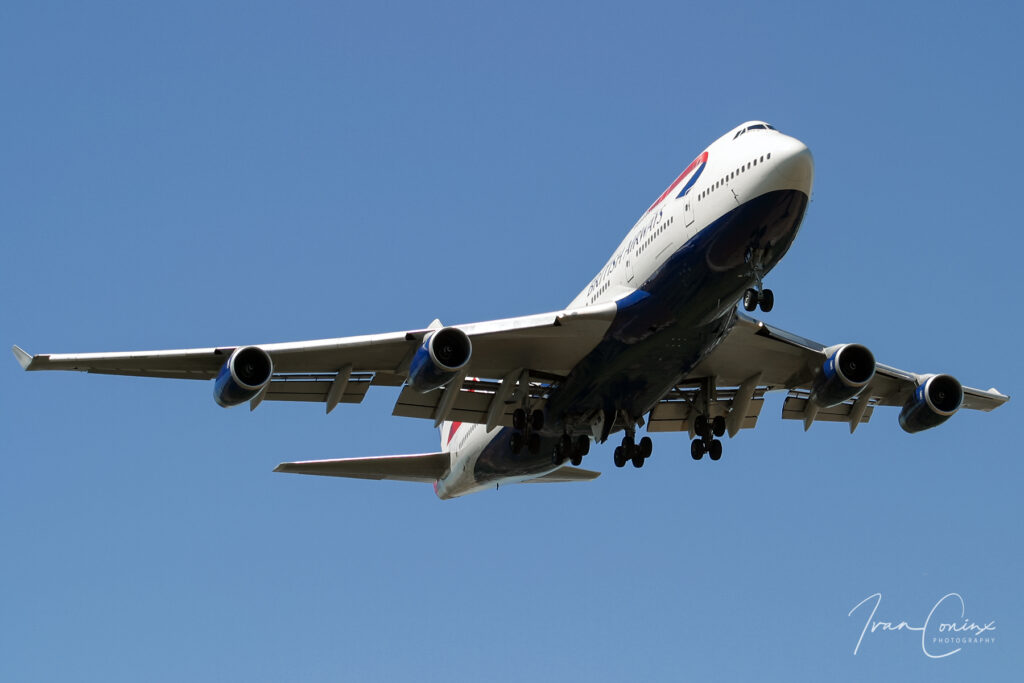 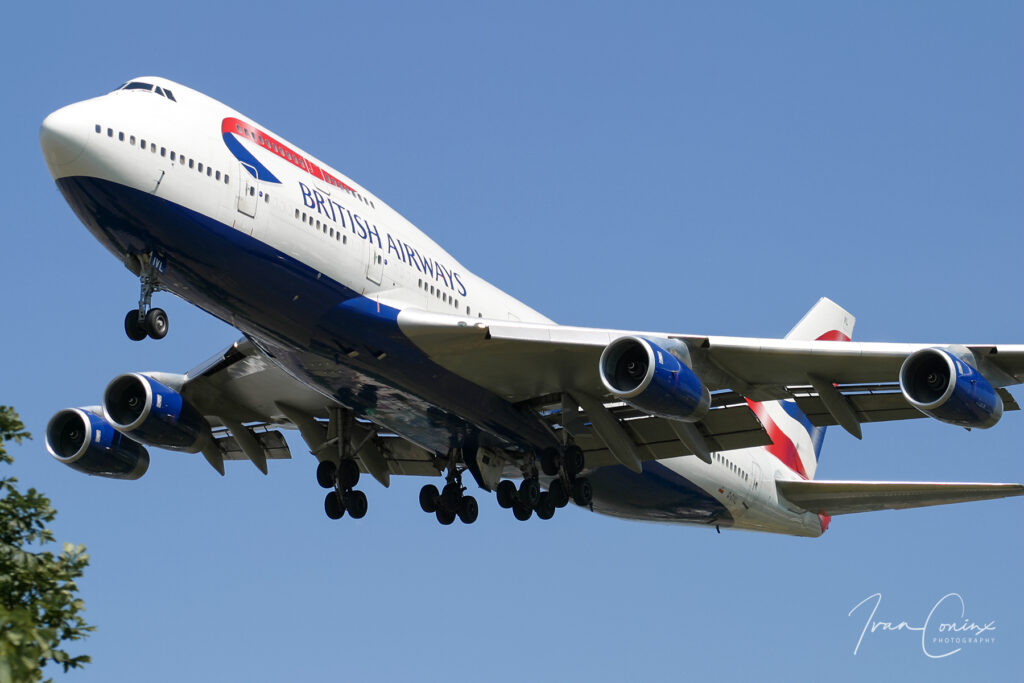 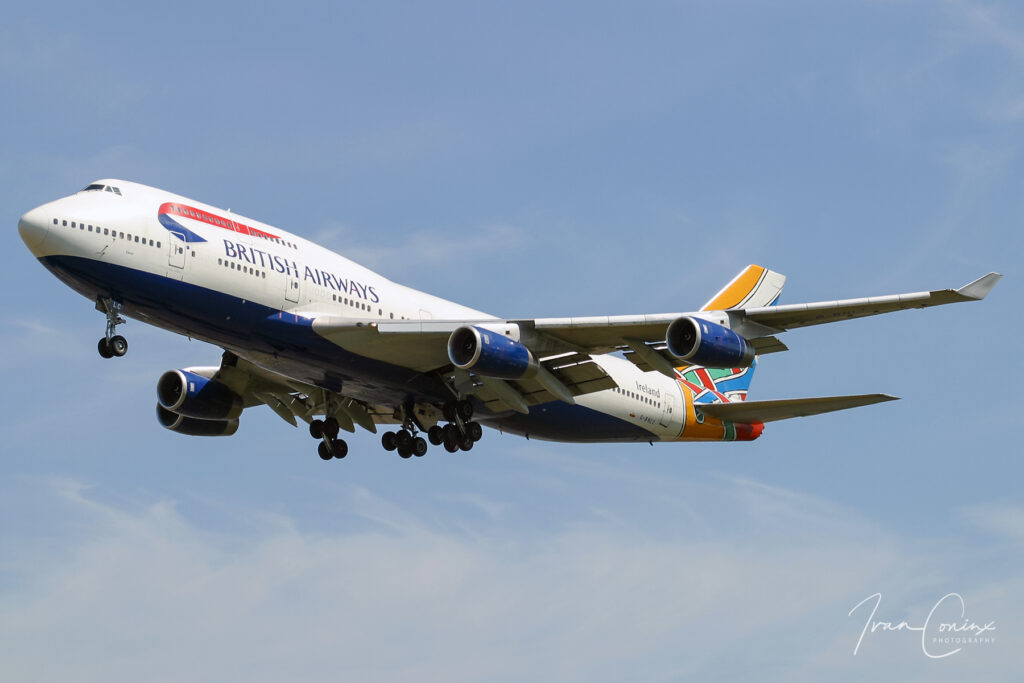 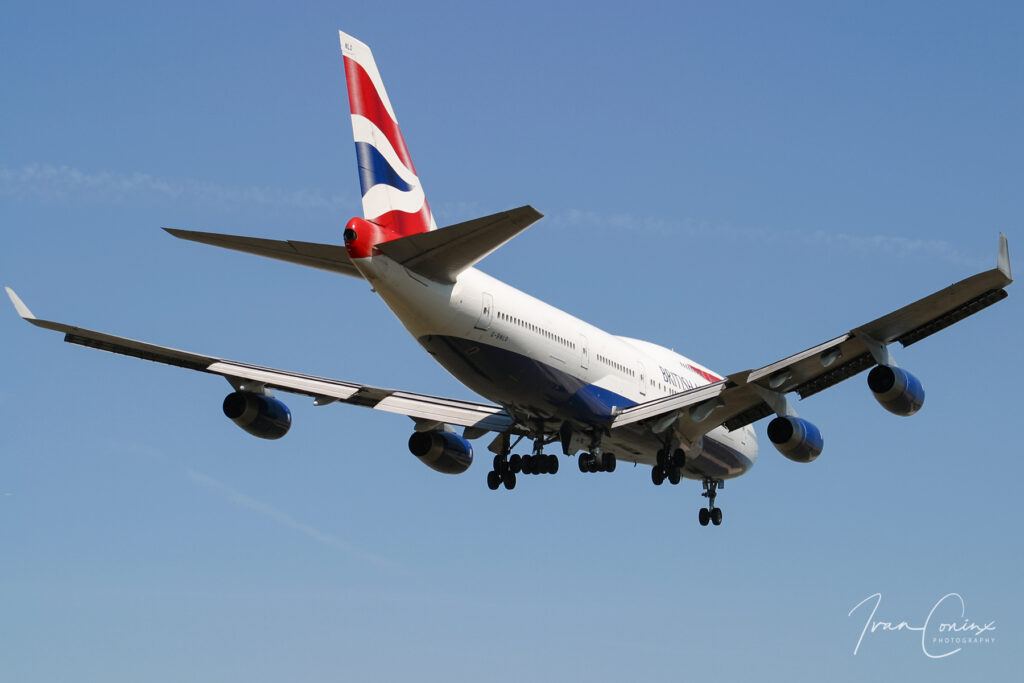 In 2019, to mark its centenary, British Airways re-painted three of its Jumbo Jets – including G-CIVB – in heritage colours donning its historic BOAC, Negus and Landor livery. The BOAC Jumbo Jet put in a guest appearance with the UK’s aerobatics team The Red Arrows, much to the delight of spectators, at the 2019 Royal International Air Tattoo.

Over the past few years, British Airways had begun to gradually retire the ageing fleet of Boeing 747 aircraft, but continued to operate a large fleet of Jumbo Jets. Final retirement of the type was not planned before 2024. The airline had also announced that it would eventually replace the Boeing 747 Jumbo Jet with the new Boeing 777X aircraft, Boeing’s newest twin-engined long haul aircraft. 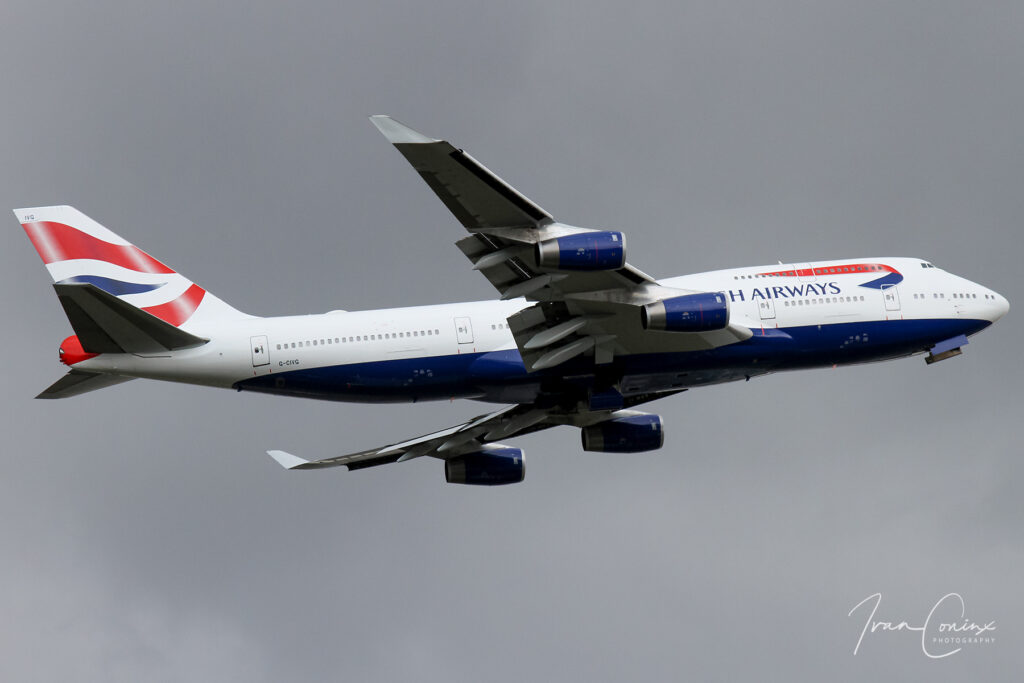 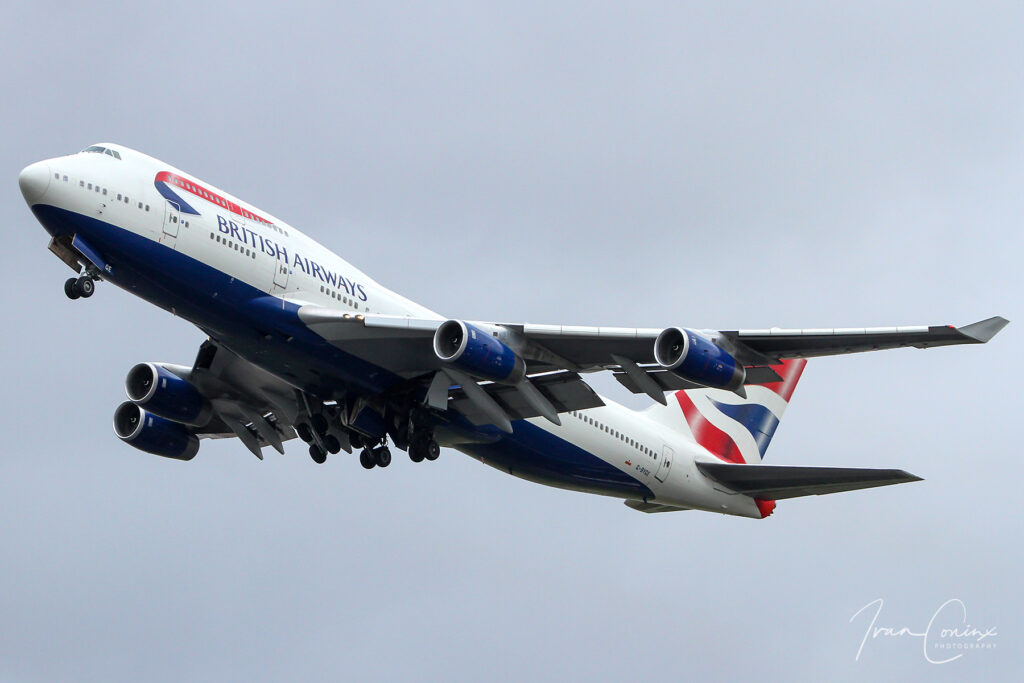 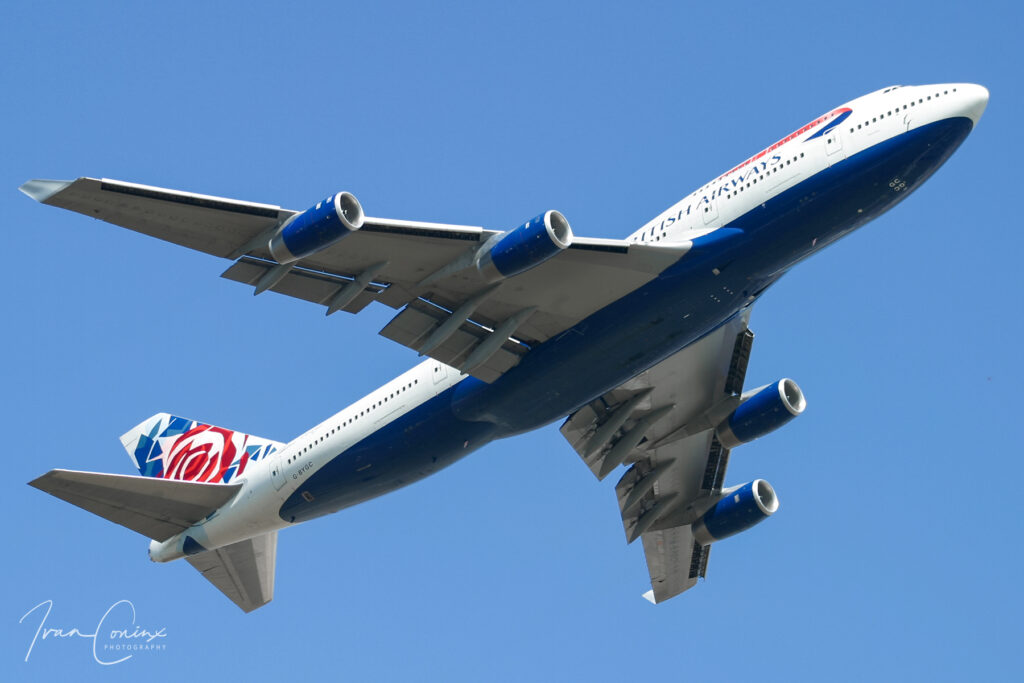 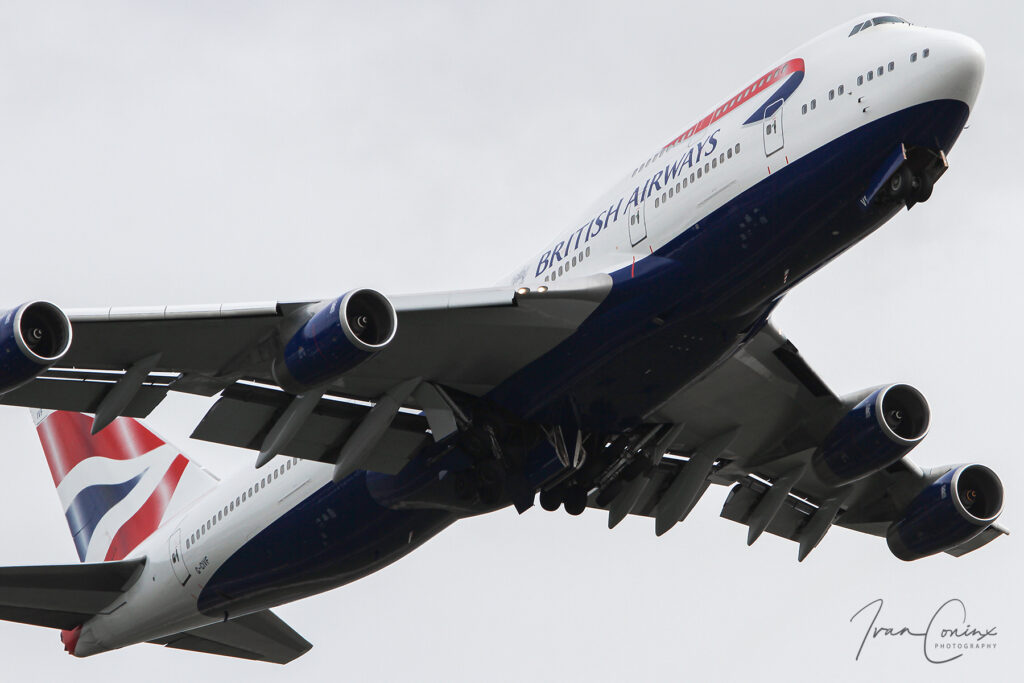 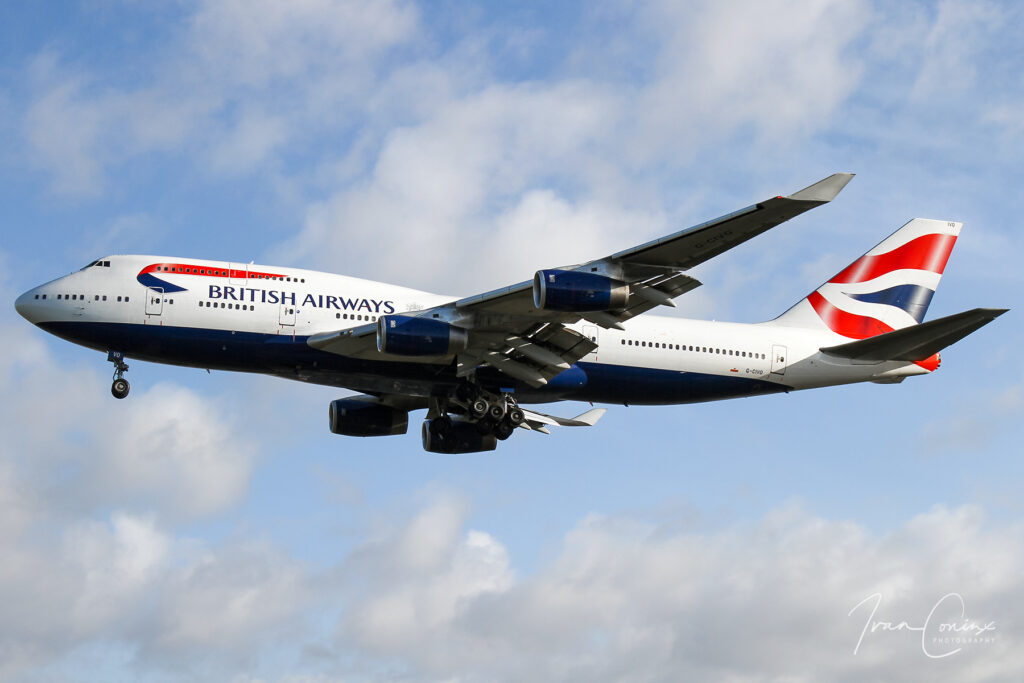 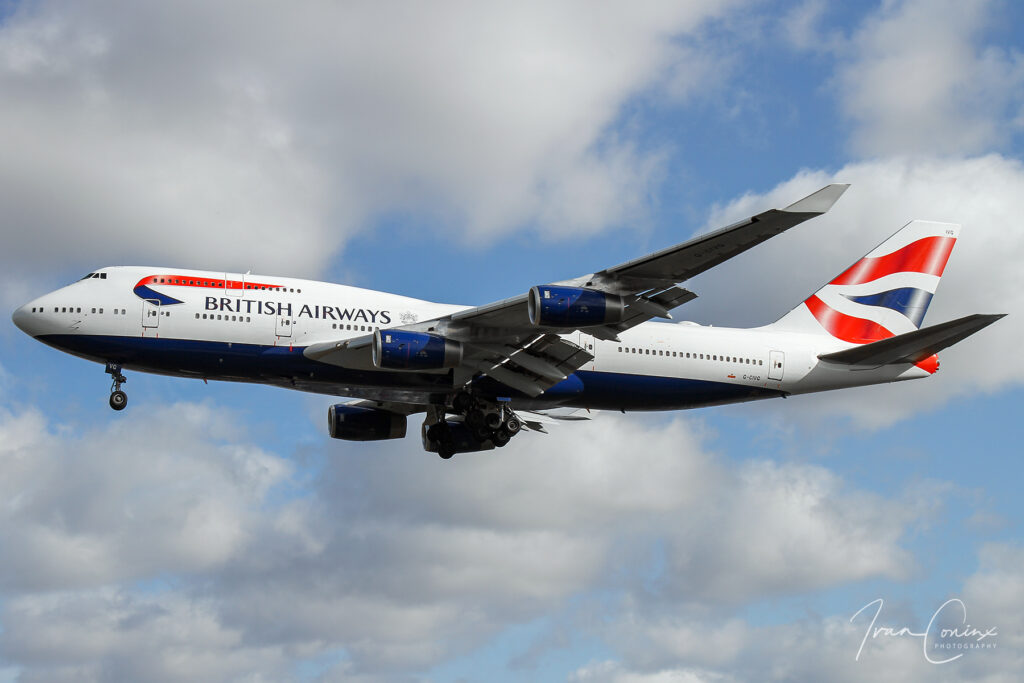 Unfortunately, due to the worldwide coronavirus outbreak in 2020 and the resulting dramatic decline in demand for air travel, British Airways was forced to move forward the retirement of its Boeing 747 fleet. In July 2020, the airline sadly announced that the its remaining Boeing 747 Jumbo Jets had flown their final commercial services.

After KLM already announced the early retirement of its Boeing 747 fleet and completely stopped operating Boeing 747 passenger flights at the end of March 2020, this is another sad day for the aviation industry and it marks the end of an era for British aviation.

So long, British Queen of the Skies. You will be missed…