On December 4th 2013, Belgian airline Jetairfly celebrated the arrival at Brussels Airport (BRU/EBBR) of its Boeing 787 Dreamliner OO-JDL. The aircraft landed in BRU around lunchtime, after a long non-stop delivery flight from the Boeing factory of Everett, Seattle.

A couple of weeks earlier, the airline had announced that it would operate the aircraft on a number of short- and medium-haul routes during the first couple of weeks. This is a normal procedure when an airline starts operating a new aircraft type. One reason is that it allows typerated pilots to get more acquainted with the aircraft as it allows them to perform as much takeoffs and landings as possible in the shortest amount of time (i.e. without cruising over the North Atlantic Ocean for hours).

The first revenue earning flight for OO-JDL was set as flight JAF7567 from Brussels to Malaga (AGP/LEMG) on the morning of December 8th 2013. As I couldn’t resist, I quickly checked fares on the jetairfly.com website and decided to book a seat aboard this unique flight. At the same time I also booked a seat on Vueling’s flight AGP-BRU on the same day.

On Sunday December 8th, after a short night I woke up at 03:00 in the morning. After a quick shower and following a short breakfast I made my way to Brussels Airport where I arrived around 03:45. After parking my car at Frontpark 1, I went to the refurbished ‘old’ terminal building, where check-in for this flight had already begun at row 12 (the usual check-in row for Jetairfly flights). Queues were still quite low, so after only 5 minutes I could check-in. The check-in agent confirmed that the flight would be operated by the Dreamliner (actually she didn’t confirm the Dreamliner aircraft type as such, she only confirmed the 3-3-3 seating configuration). 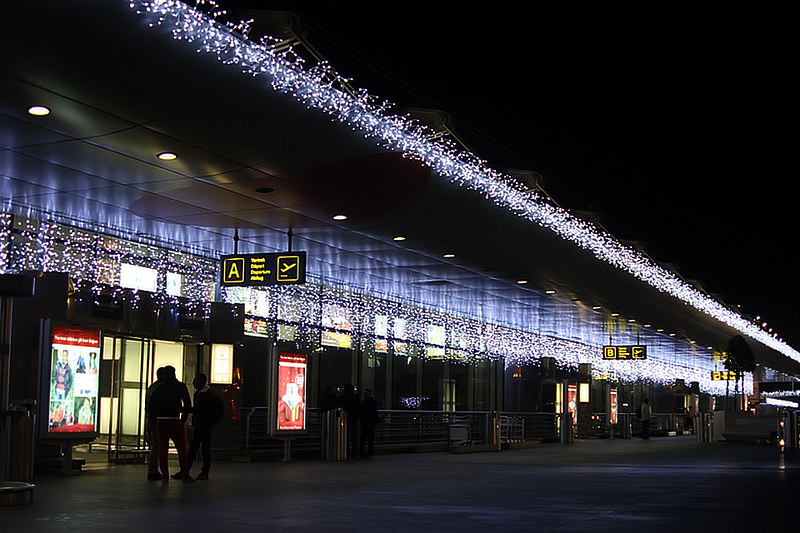 Christmas spirit at Brussels Airport on a cold Sunday morning. 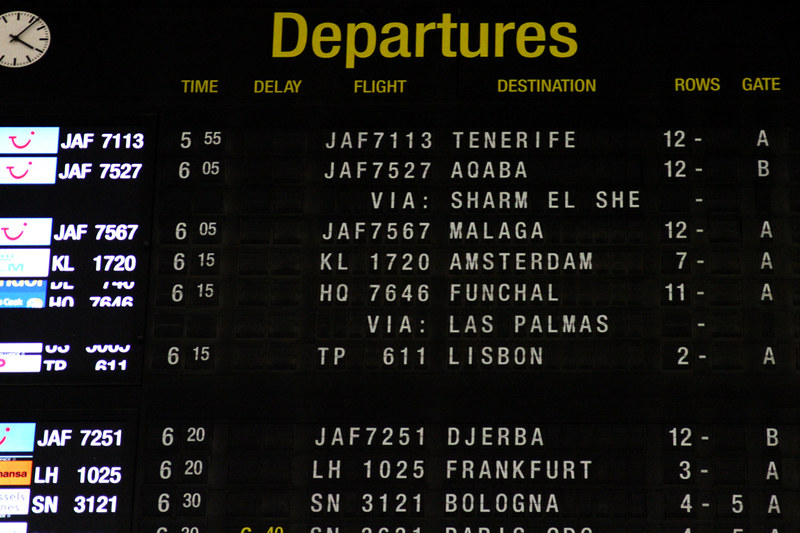 After taking some photos of an almost empty terminal building, I made my way to the A Pier. I noticed that the usual ‘security gates’ for the A Pier in the main terminal have already been replaced by others, due to work in progress for the new Connector building. I continued my way to the A Pier and after going through security (where queues were also quite low), I went to gate A57. I was happy to notice that indeed OO-JDL was nicely parked at stand 157. Staff members from all the various companies involved (Jetairfly, Tec4Jets, GateGourmet, Aviapartner,…) were already very busy making necessary preparations for this maiden trip. 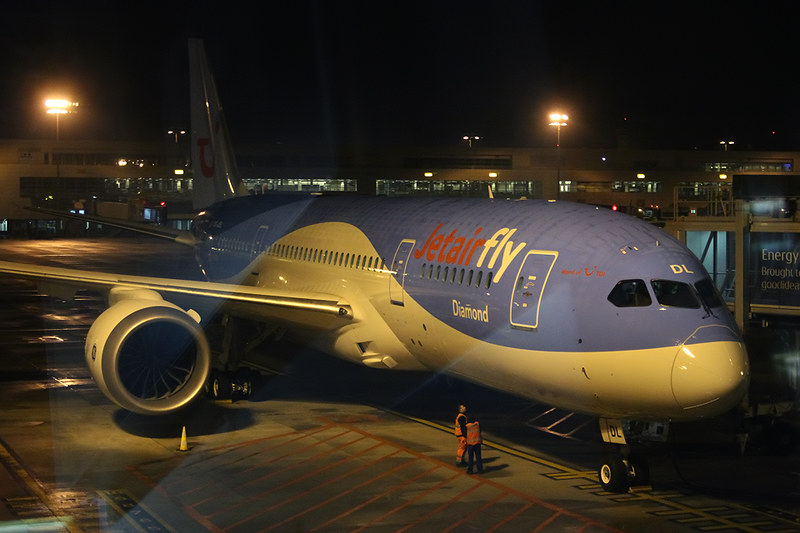 The Jetairfly B787 Dreamliner parked at gate A57.

After an obligatory photo shoot of the aircraft parked at the gate (which was not that easy due to reflections in the windows of the A Pier), I decided to take a brief rest amidst the other passengers and wait for boarding to commence.

Around 5:45 the gate agent announced that boarding could begin. As this is the first time the aircraft will be operated commercially with passengers, some ground operations supervisors as well as Jetairfly ground operations management were at the gate, to make sure boarding and all other ground operations related tasks went smooth and uneventful. 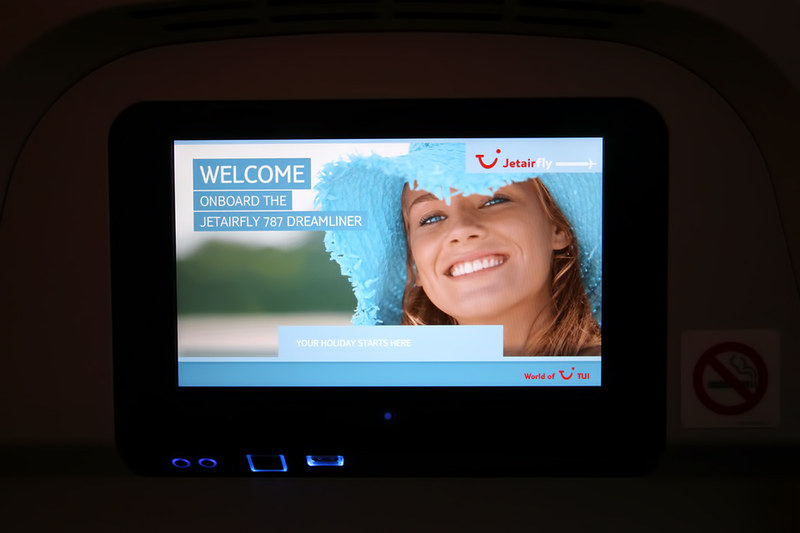 Welcome message on the IFE.

Boarding went quite fast and without any problems. All pax were kindly welcomed by the purser and other cabin crew members. Cabin crew members assisted pax who had any problems or questions. As could be expected, the flight was not full (I estimate the load factor was around 50%). Some of the first things you notice upon entering the aircraft, are the spacious feel of the cabin, the large overhead bins, the individual IFE screens in Economy+ and Economy (in Premium Club, the IFE screens are located in the armrests), and the larger windows (the Dreamliner cabin windows are 30% larger as compared to other jet airliners and are dimmed electronically). 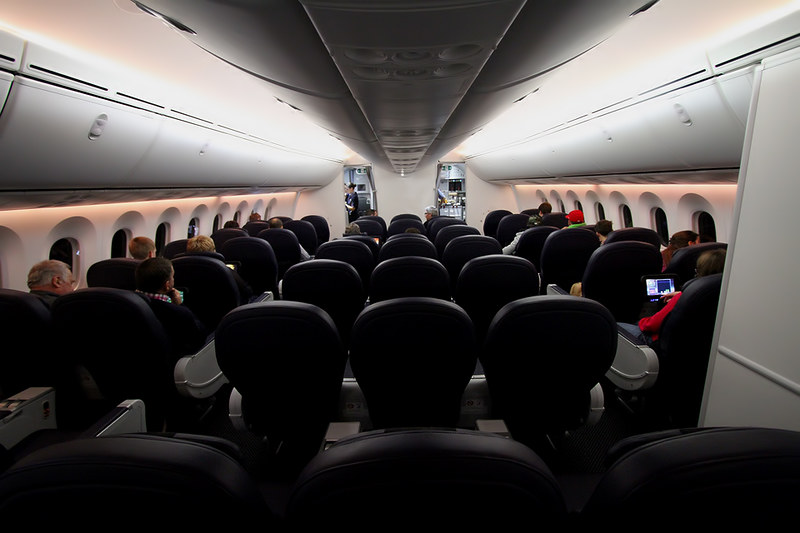 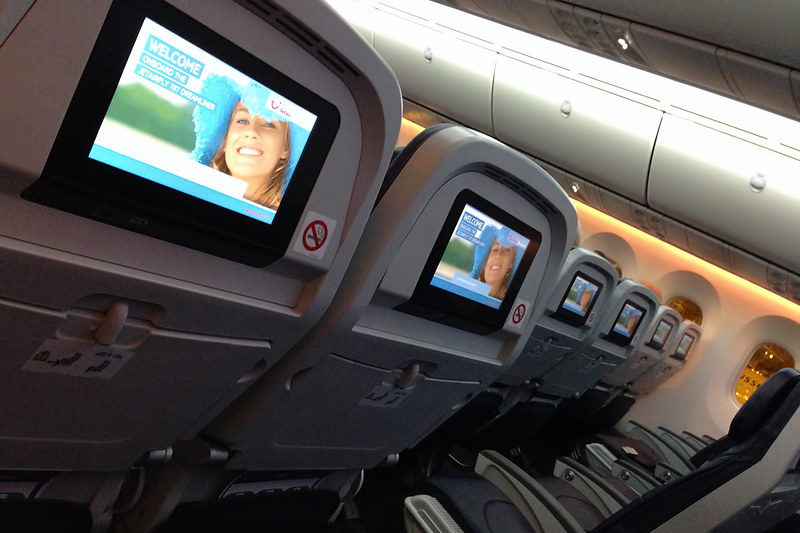 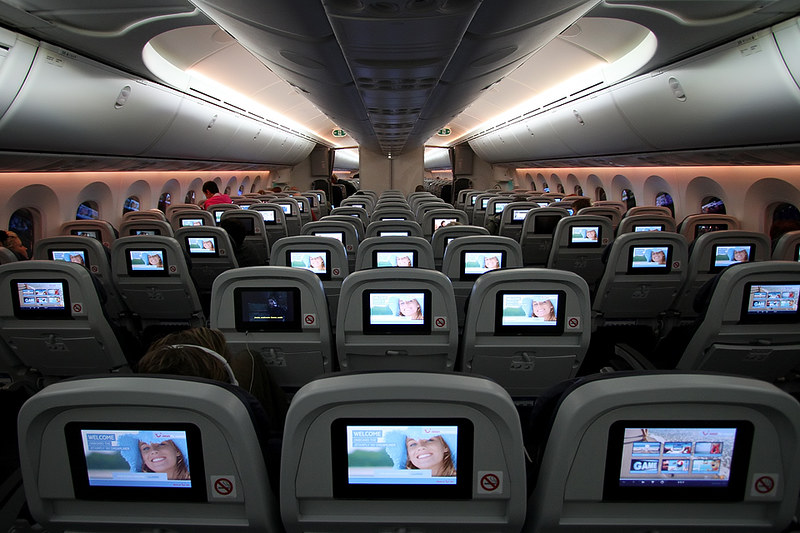 Once boarding was completed, we were welcomed on the PA by one of the pilots on the flightdeck (as can be expected on such a flight, there were more than 2 pilots on the flightdeck, including the Jetairfly DFO who was pilot in command). Few moments later, the aircraft doors were closed and pushback commenced. After what appeared to be a quick test of the Sky Interior mood lighting system, the purser welcomed everybody via the PA for the maiden trip of the Jetairfly Dreamliner and the cabin crew members showed the obligatory safety demonstrations. As we taxied to RWY 25R, lights were dimmed as usual. 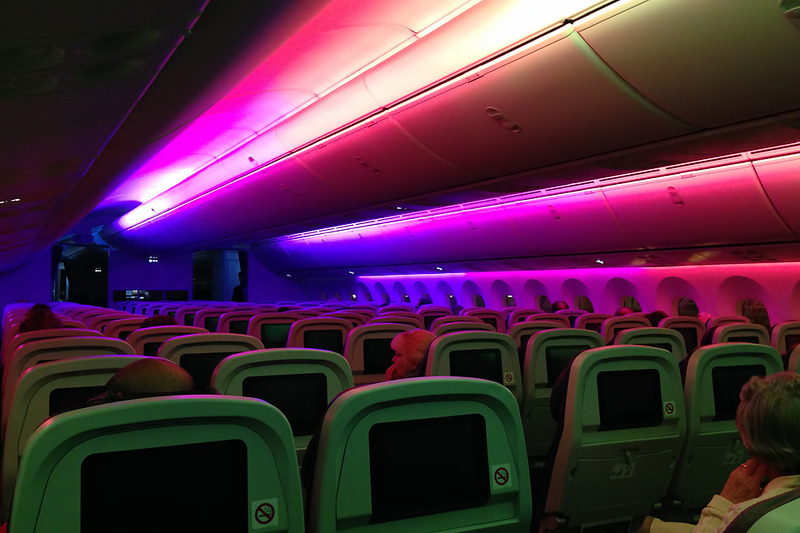 After giving way to a Thomas Cook A320 (already wearing the new livery on its tail), we entered the active runway and few moments later we took off from RWY 25R. The climbout from BRU was very smooth and uneventful. As soon as we reached a safe altitude, the cabin lights went on again, and the IFE system was fully available. I made a quick test and it has everything you can expect from todays IFE systems, including AVOD. There are quite some options to choose from (movies, TV series, music, games and you can even connect your personal device via USB). You can also recharge your iPhone via the USB port. Some engineers from Panasonic were also on the flight, in order to do some checks and/or problem solving if needed. 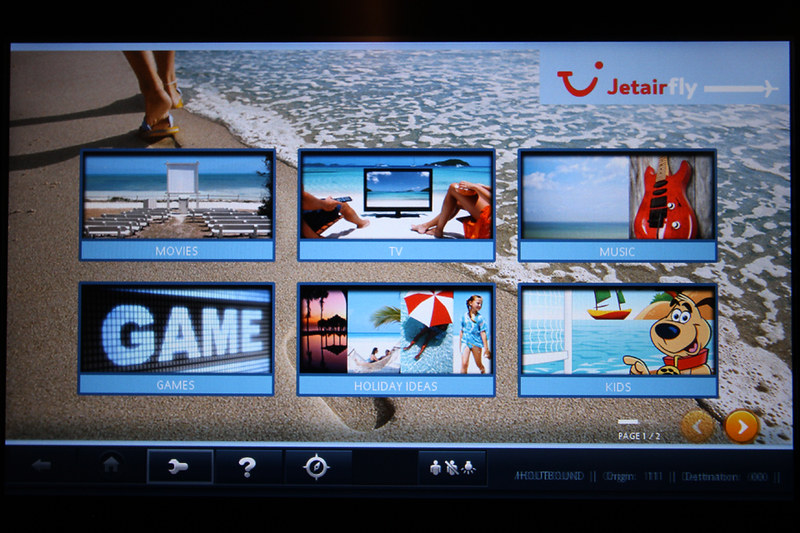 Home menu of the IFE. 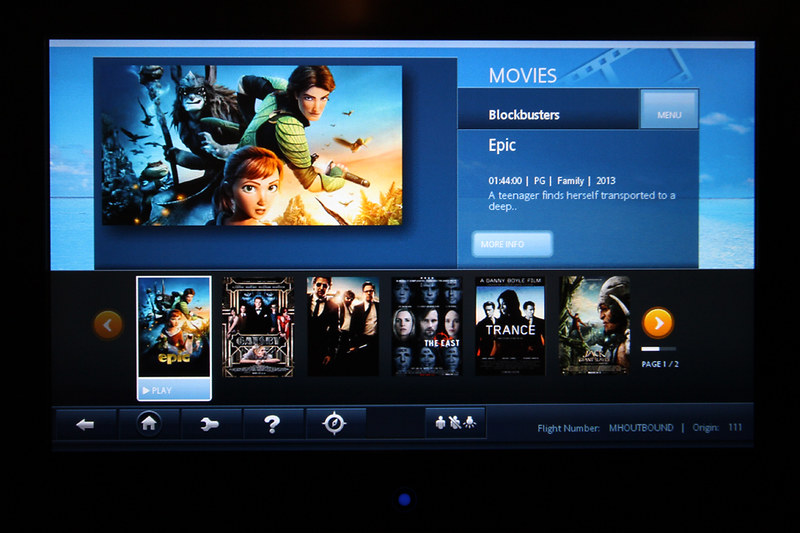 Plenty of movies to choose from on the IFE. 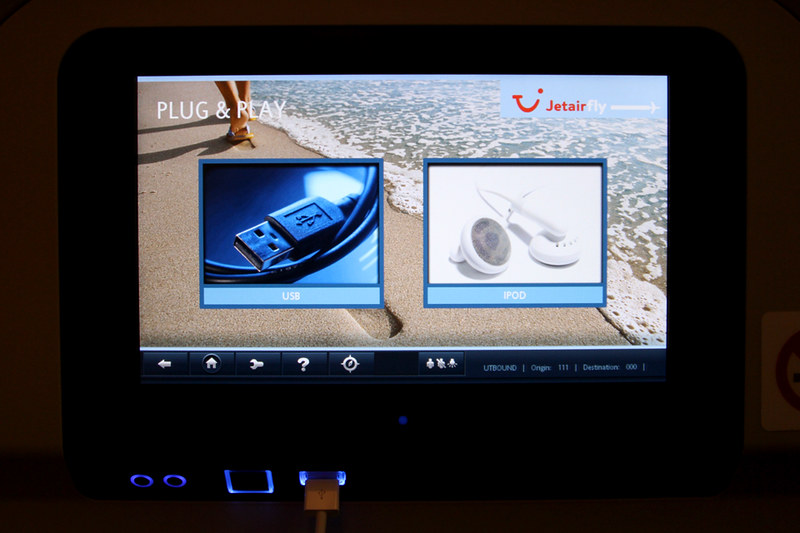 Plugging in your personal USB device or iPod is also an option.

Once we had reached our cruise altitude, cabin crew members commenced their service and personal headsets were handed out to all passengers. The cruise was extremely smooth. The commander, Jetairfly Director of Flight Operations (DFO), greeted the passengers from the flightdeck and gave some more explanations about the aircraft. Due to its design, the wings of the Dreamliner tend to flex more. The aircraft is also equipped with advanced sensors that help to counter air turbulences. As already mentioned, the cabin windows are also 30% larger. 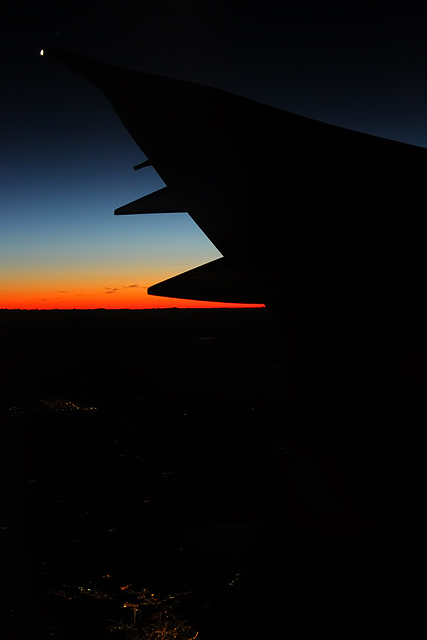 Magnificent view from FL410 as the sun is about to rise.

As the flight progressed, I made a walk through to the front and the back of the cabin and made some additional photos. As the sun started to rise during our cruise, the colours on the horizon were quite dramatic, so I made some nice photos of this as well. 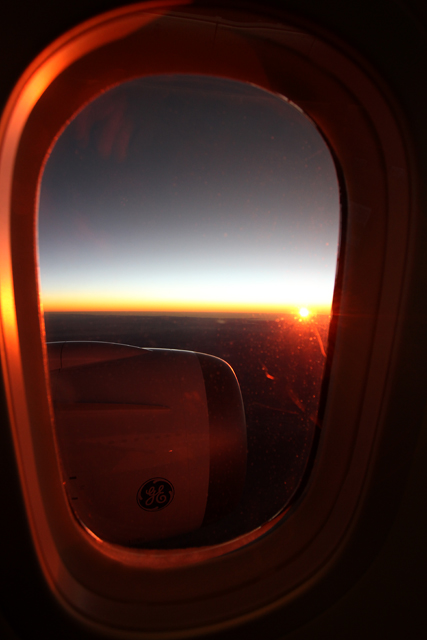 Sunrise as seen from inside the Dreamliner.

In the later part of the cruise, all pax were given a complimentary box with 2 Neuhaus pralines to celebrate the inaugural flight. Quite a nice (and tasty) gesture I must say… 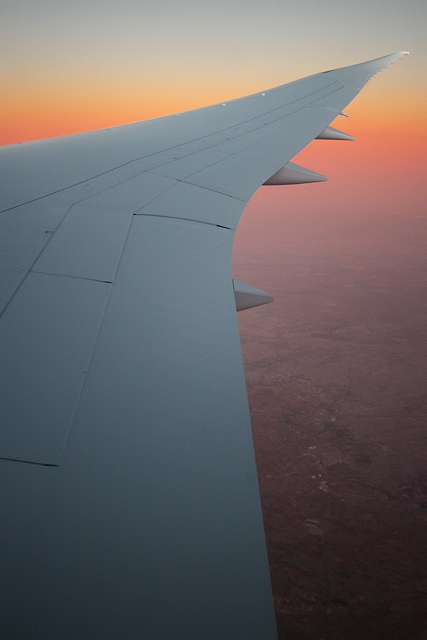 View of the advanced Dreamliner wing, shortly after sunrise. 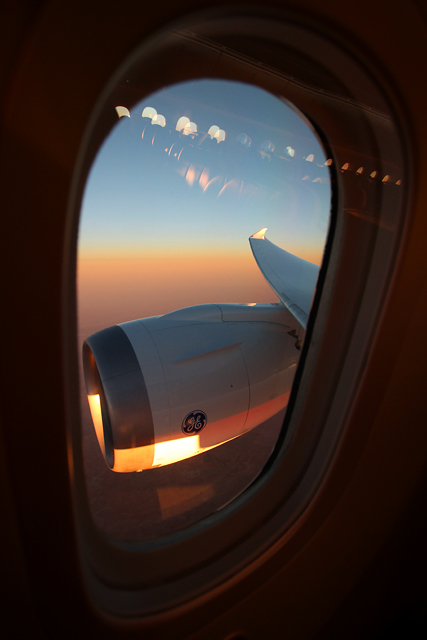 Around 8:30 and after a flight of about 2 hours, we commenced our descent into Malaga, so all pax were adviced to put their seatbelt back on and put the headrest in the upper position. The cabin lights were dimmed again as soon as we began the final phase of our descent into Malaga. The approach took us straight over the Mediterranean Sea, continued by a right turn in order to alight the Dreamliner with the final course for Malaga’s RWY 31.

At 8:44 we landed on RWY 31. After a short rollout we exited the RWY and taxied to our assigned stand at gate 54. Unfortunately, we were not greeted with a water salute from Malaga’s airport fire brigade. During the short taxi to our parking position, the cabin crew welcomed us to Malaga and wished everybody a nice stay. As they were aware that some people were aboard the flight only to witness the maiden Jetairfly Dreamliner flight, the purser also wished us a safe trip home later that day. A nice and very warm gesture again… 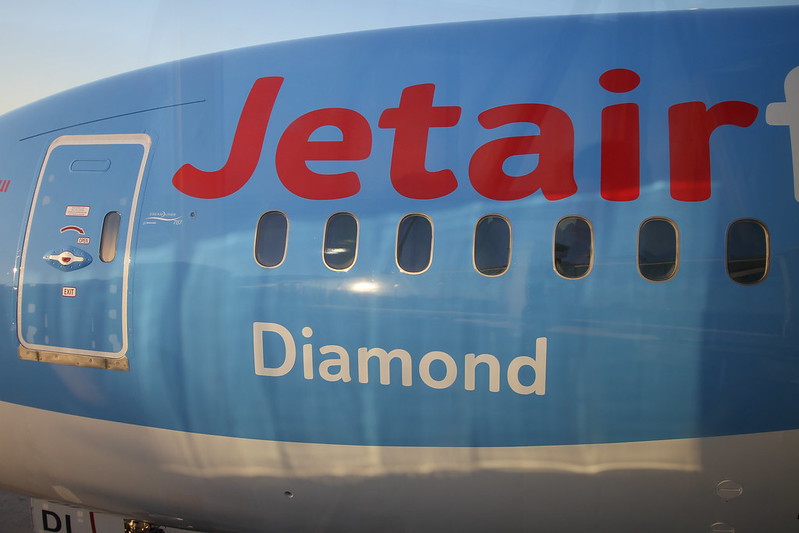 The Dreamliner docked at gate 54 in Malaga.