The Chinese carrier will operate three direct flights per week between Brussels Airport (BRU) and Shanghai Pudong International Airport (PVG). The new service will be operated on Mondays, Wednesdays and Fridays with a Boeing 787-9 Dreamliner, one of the world’s most sophisticated and efficient aircraft. 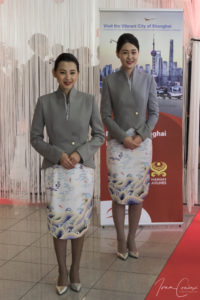 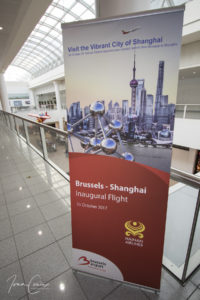 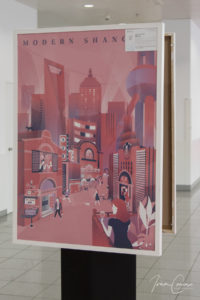 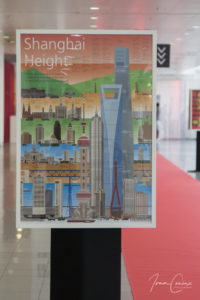 The new three weekly services between Brussels Airport  and Shanghai Pudong International Airport was officially inaugurated at Brussels Airport, in the presence of Prime Minister Charles Michel, Deputy Prime Minister and Minister of Employment, Economy and Consumers, Kris Peeters and Minister of Transport François Bellot as well as Vice President of Hainan Airlines Hou Wei and Ambassador Qu Xing of the People’s Republic of China. Master of Ceremony of the inauguration ceremony was Head of Aviation Development at Brussels Airport, Léon Verhallen. 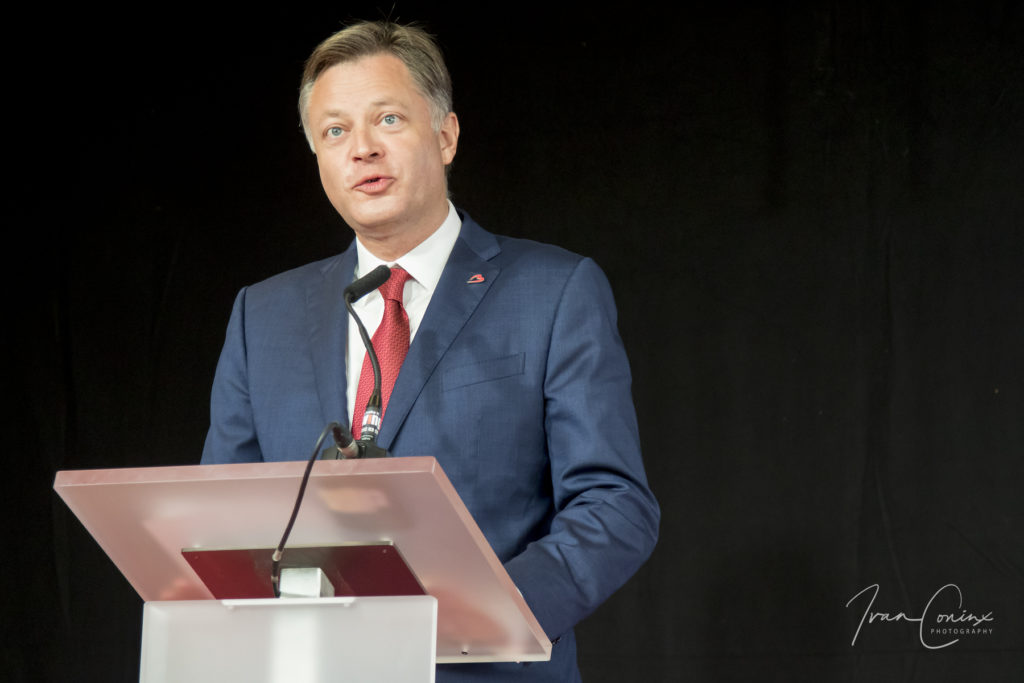 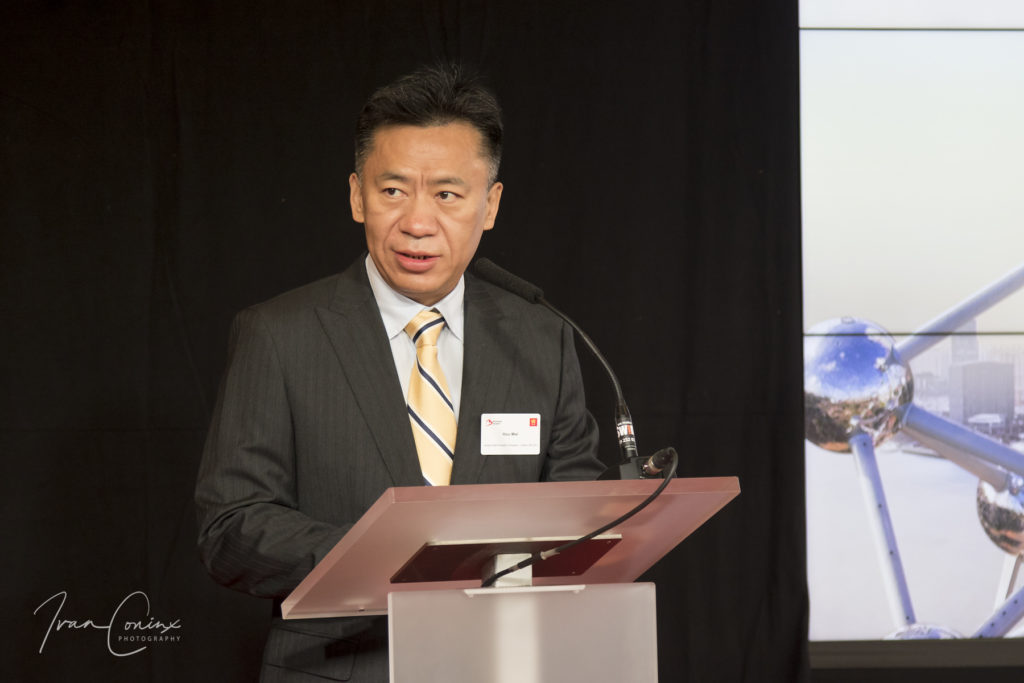 The new Shanghai to Brussels route is the airline’s second direct service between Belgium and mainland China. By building this air bridge, Hainan Airlines will help the two countries enjoy the benefits brought by the “One Belt, One Road” initiative. 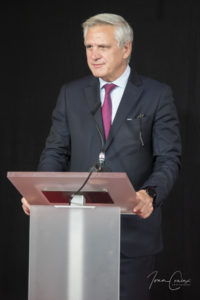 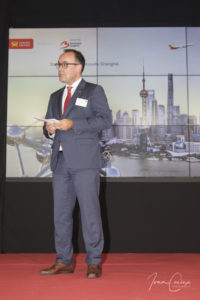 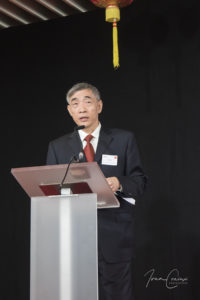 “Since we started with our route from Beijing to to Brussels in 2006, hundreds of thousands of people have been able to enjoy the universally-praised service that Hainan Airlines offers between Belgium and China”, explains Hou Wei, Vice President of Hainan Airlines. “Business and leisure trips between Belgium and China have already grown enormously in recent years, and our new offer of direct flights between Shanghai and Brussels will only accelerate this expansion.” 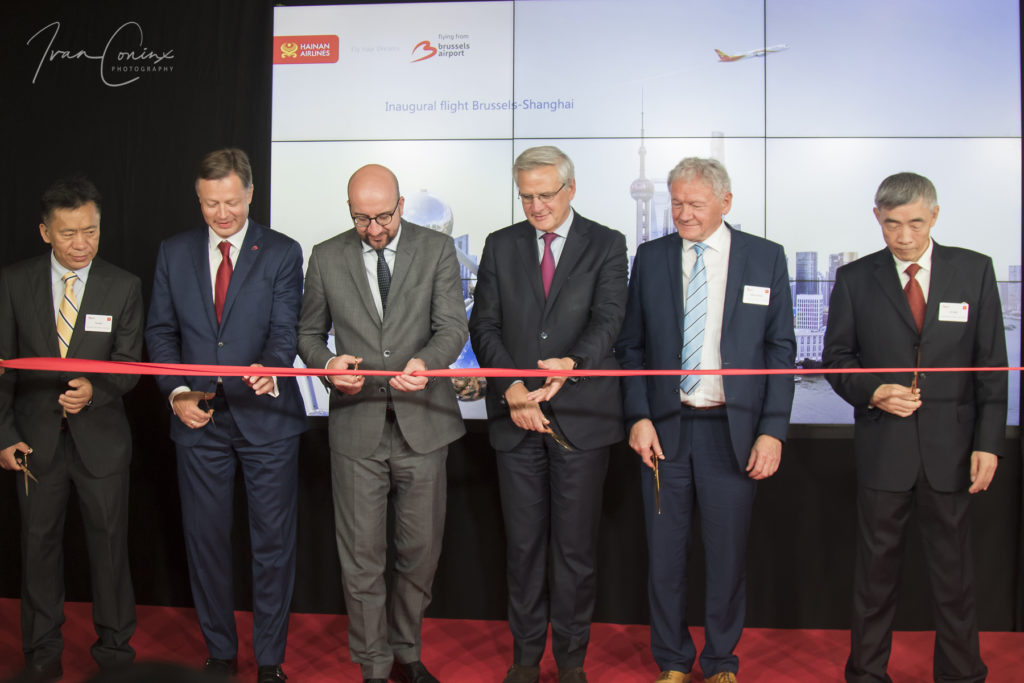 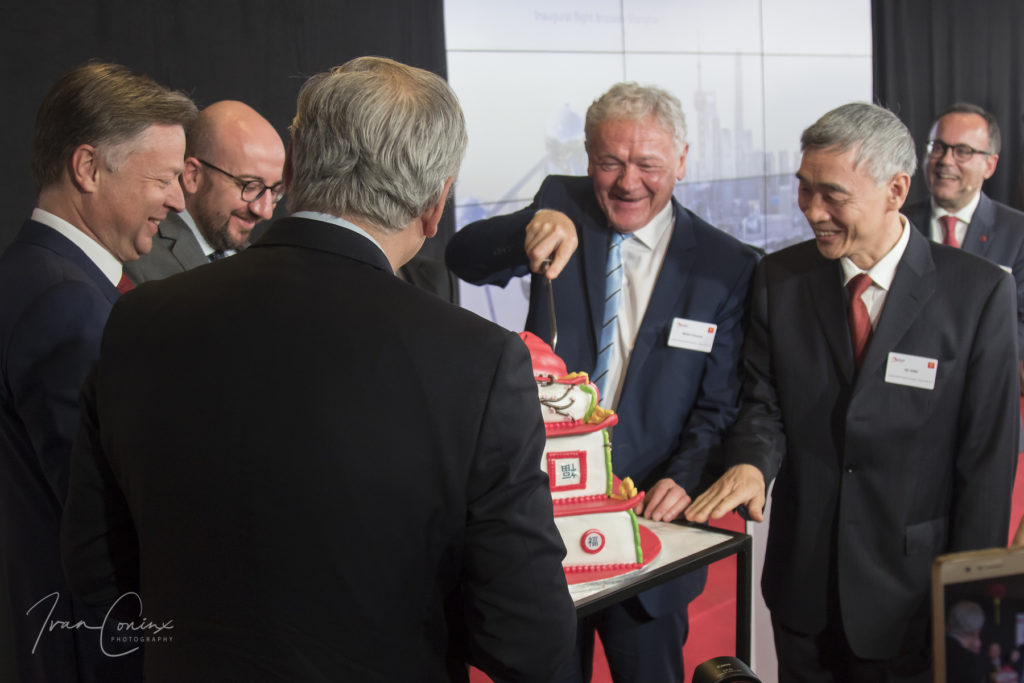 Exchange of gifts between Brussels Airport and Hainan Airlines

After the official inauguration ceremony, guests were invited to an aircraft visit of the Boeing 787 Dreamliner. The very first non-stop flight between Shanghai and Brussels was operated with Boeing 787-9 Dreamliner B-7880. The aircraft with manufacturer serial number 60283 and line number 430 was delivered to Hainan Airlines in June 2016.

The Hainan Boeing 787-9 Dreamliner features a two-class configuration with 30 business seats in a six-abreast 2-2-2 layout and 259 economy seats in a nine-abreast 3-3-3 layout.

Business Class seating features a pitch of up to 74 inches and is equipped with 180 degrees fully lie-flat seating. For passenger comfort the seats’ many varying modes of adjustment easily allow to recline or sit up at any angle. Furthermore, passengers travelling Business class on Hainan Airlines’ premium routes can enjoy the BOSE QC 25 noise-cancelling headphone, which promises a journey free from noise and the enjoyment of comfortable, undistracted personal time. 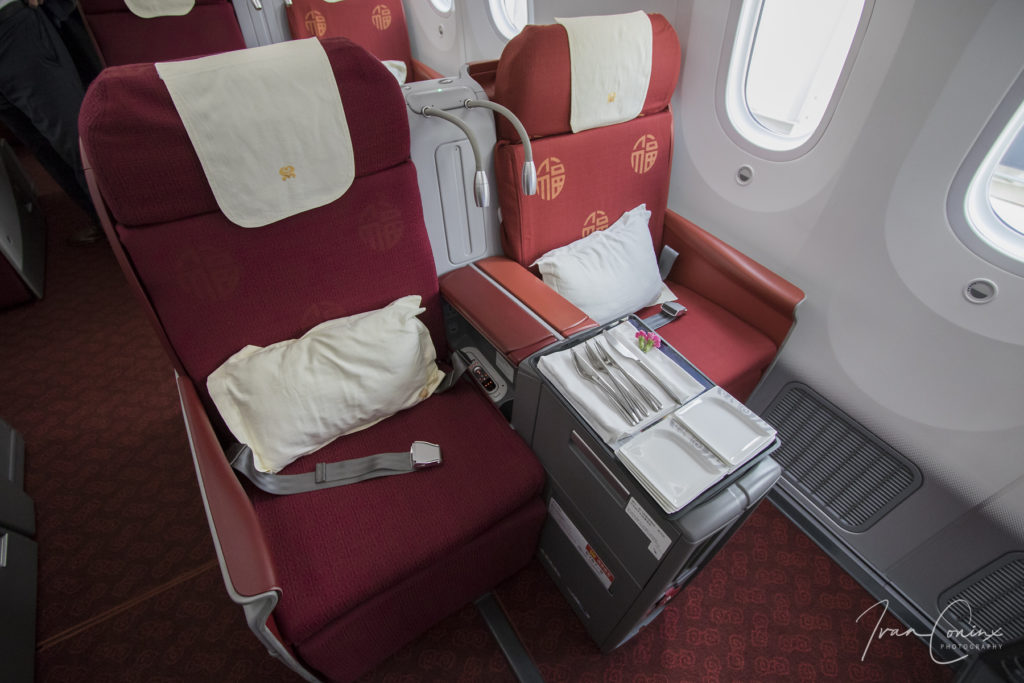 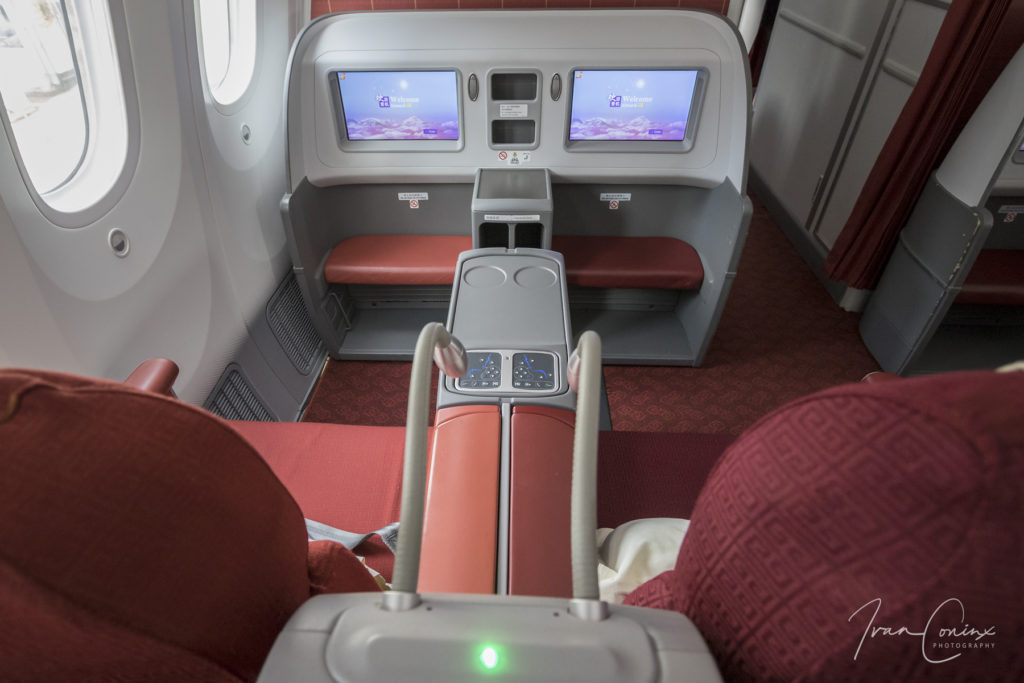 During my short visit of the aircraft, I was able to have a brief and pleasant talk with the Chef for the inauguration flight back to Shanghai. She explained me that the crew for this return flight had arrived just the day before. Most, if not all, crew members are qualified to work on both the Airbus A330 as the Boeing 787 Dreamliner, which gives Hainan Airlines great flexibility to roster its cabin crew members. The load factor in Business Class for the inauguration flight was rather low (only seven passengers booked) but this is not unusual for a new route. 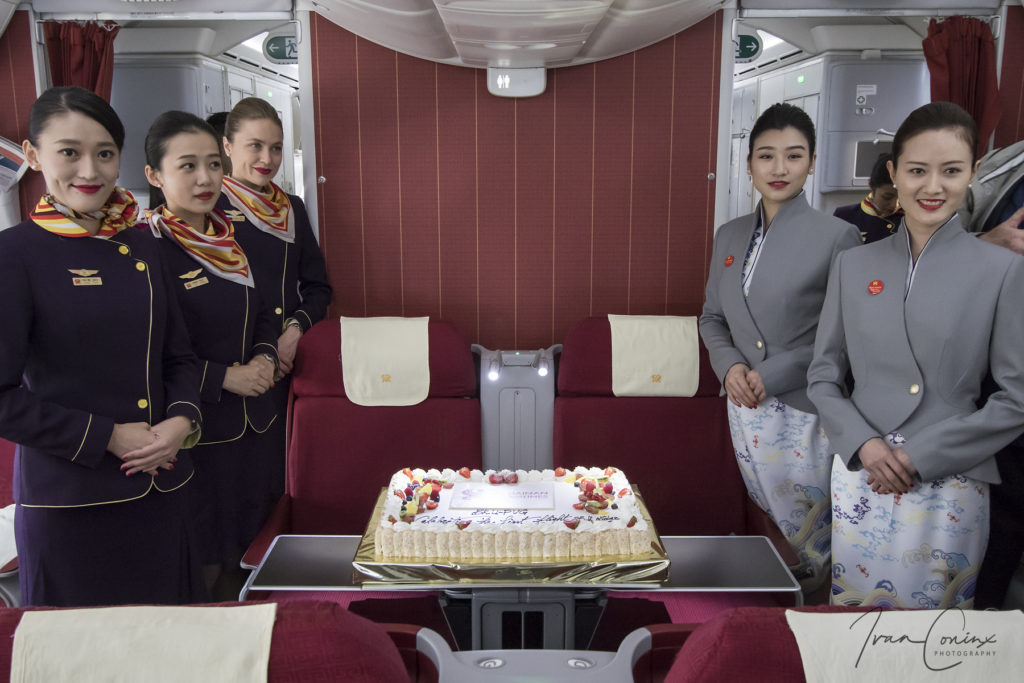 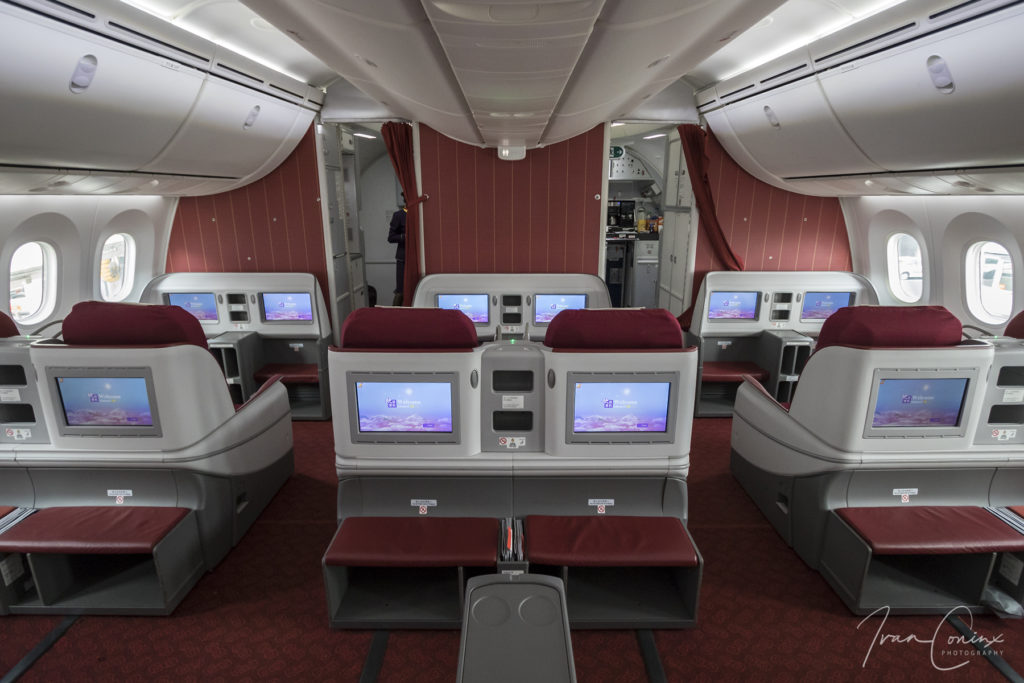 After the aircraft visit, we headed to the departure gate for the inaugural flight to Shanghai Pudong International Airport. I was quite pleased to see that the passengers for today’s flight were also being treated to a inauguration party with traditional Chinese food and gifts. 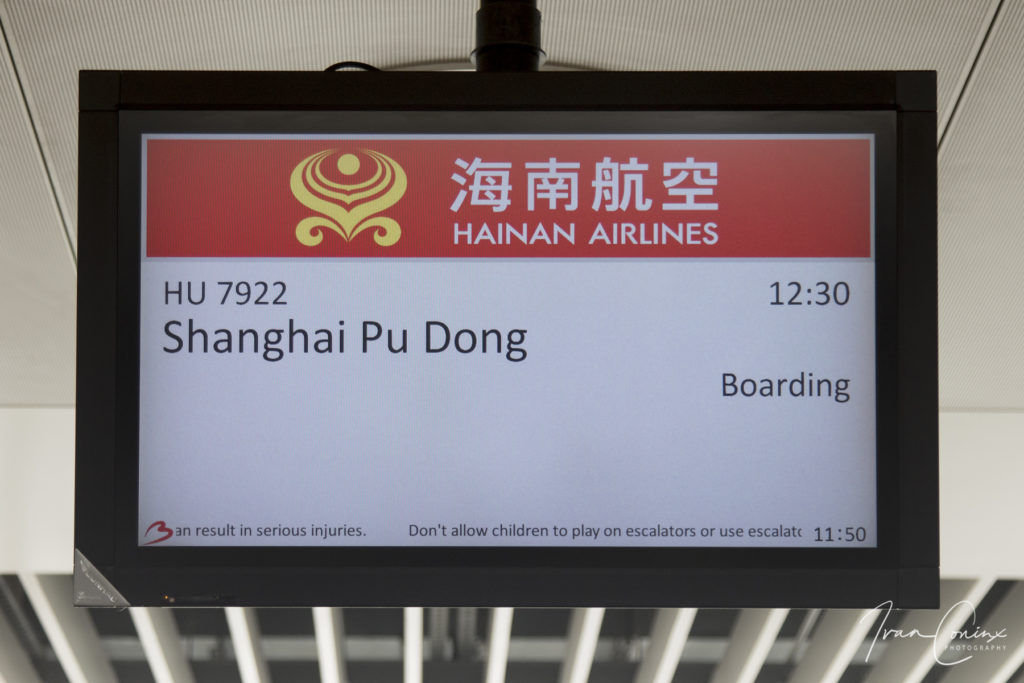 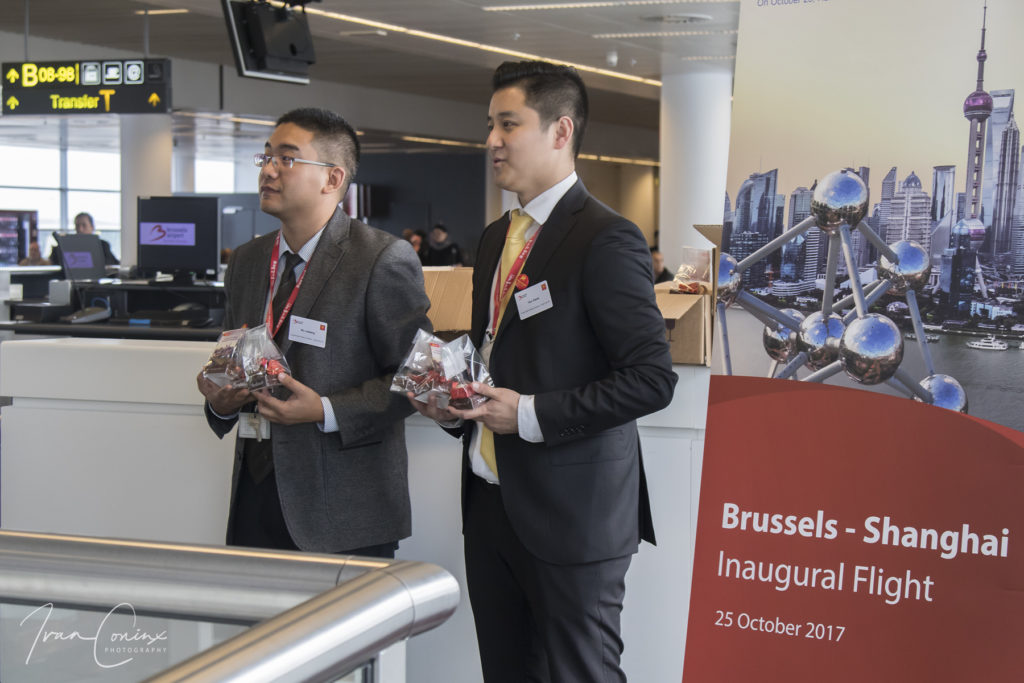 Each passenger received a small gift

At around 11:40 local time, boarding began as the first passengers started to make their way to the jetway and board the Boeing 787-9 Dreamliner.

As boarding had begun, guests of Hainan Airlines and members of the press were kindly invited to an airside photoshoot. A bus took us to an airside vantage point offering unique views of the pushback and traditional water salute by the Brussels Airport fire service.

At 12:39 local time, the Boeing 787-9 Dreamliner took off from RWY 25R at Brussels Airport. Some 10 hours and 38 minutes later, it landed at Shanghai Pudong International Airport as flight HU7922 BRU-PVG. 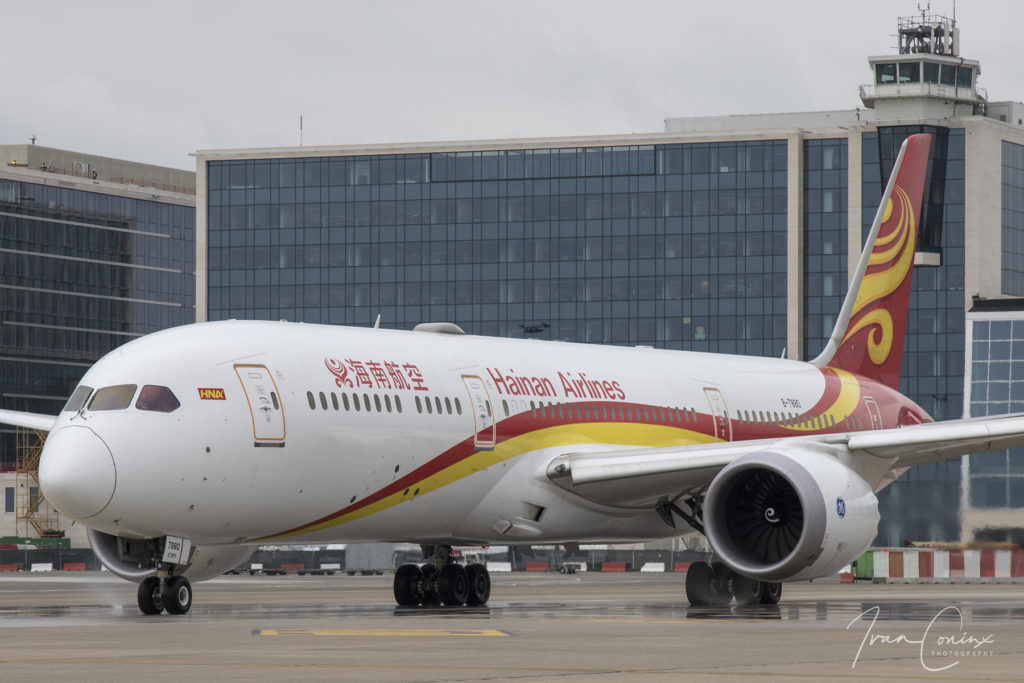 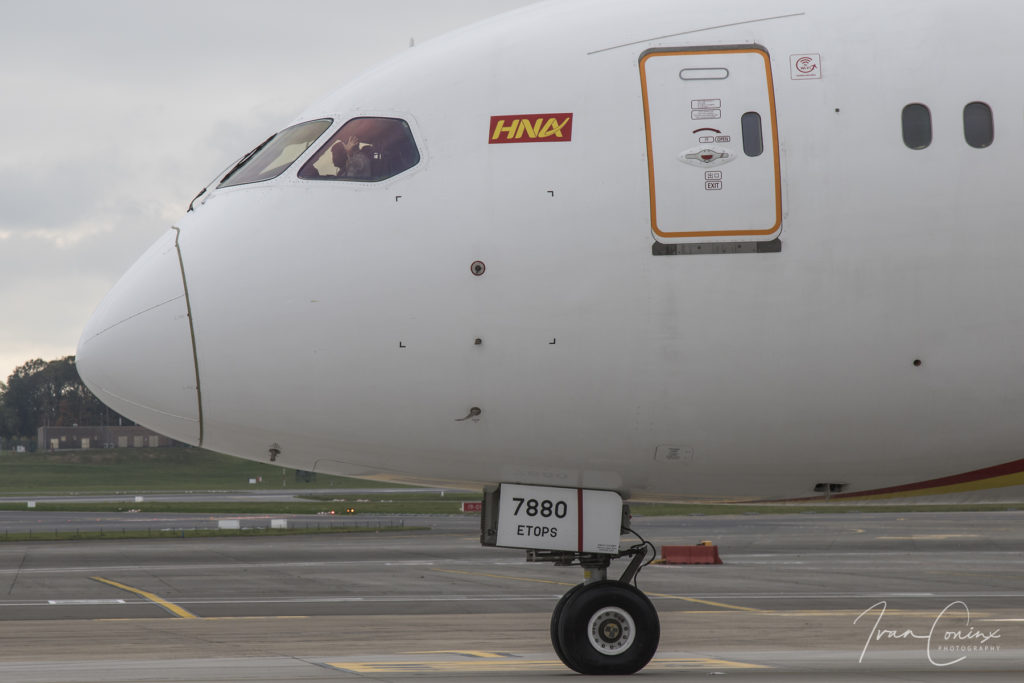 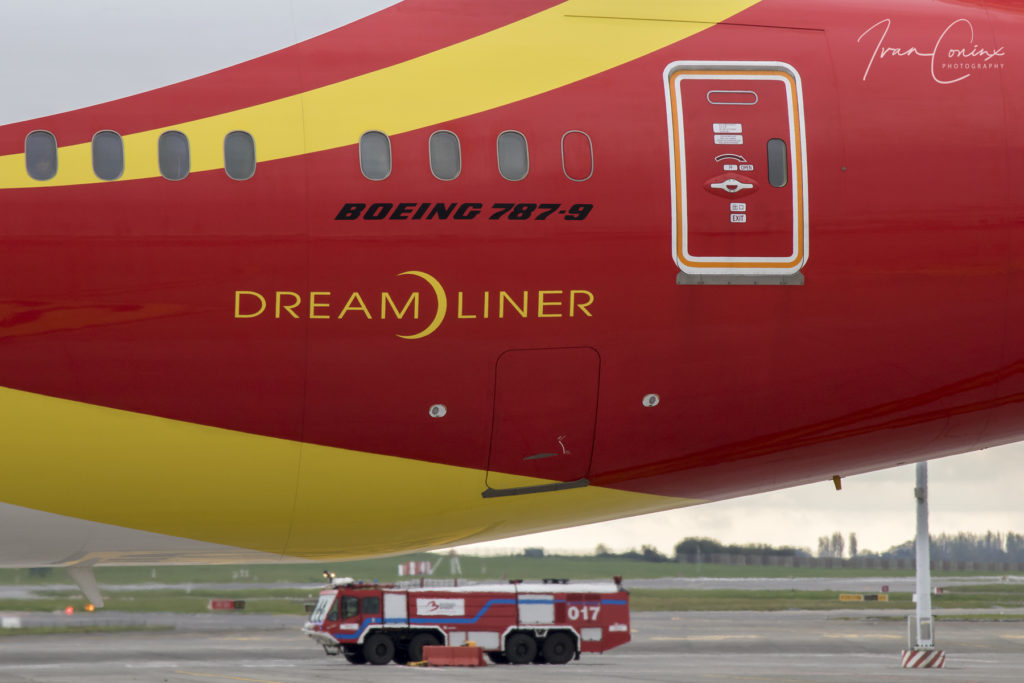 Close-up of the aft fuselage 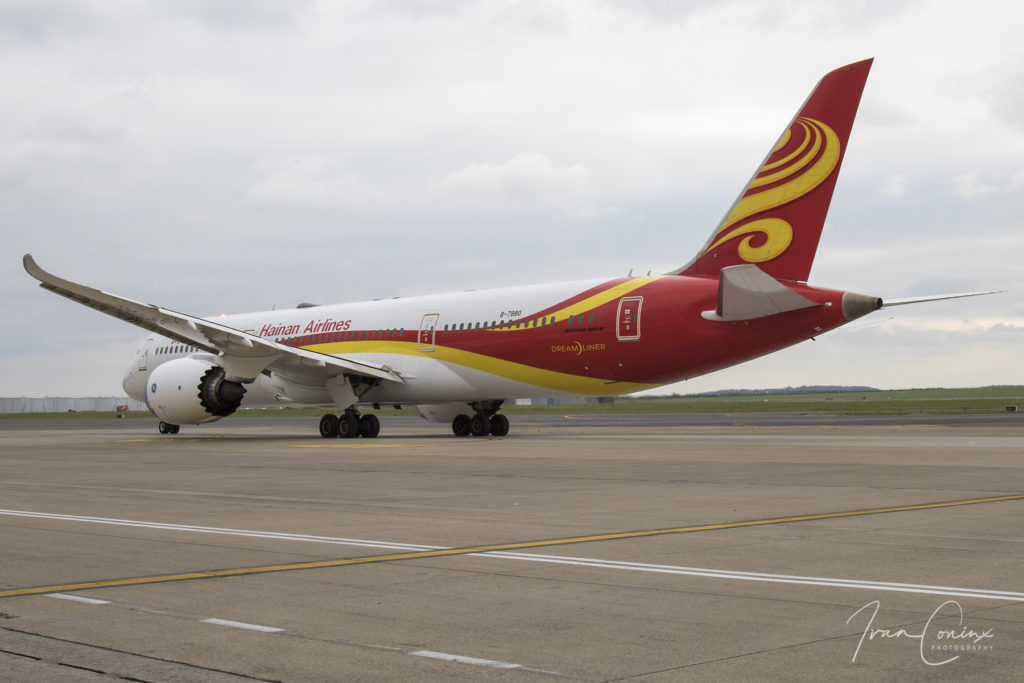 Have a good flight

Hainan Airlines will operate this new route between Shanghai and Brussels three times per week. The flight times are as follows:

Many thanks to Hainan Airlines and Brussels Airport for a unique inauguration event.