7 months, 1415 submitted ideas and 14 painting days after the start of the Belgian Icon contest, Brussels Airlines’ fifth iconic plane is ready to carry out its Belgian colors around Europe and beyond. The Smurfs design by the Italian Marta Mascellani, chosen by the public, will represent Belgium on a Brussels Airlines A320 named Aerosmurf.

On Saturday 24 March 2018 Brussels Airlines revealed Aerosmurf in the presence of winner Marta Mascellani and finalists of the livery design contest. The Smurfs, who celebrate their 60th birthday this year, are one of Belgium’s most loved comic characters and are sure to be the perfect flying ambassadors for Belgium. As of Sunday 25 March 2018, Aerosmurf is bringing the world to Belgium and the best of Belgium to the world, just like the four other Belgian Icons Rackham, Magritte, Trident and Amare. 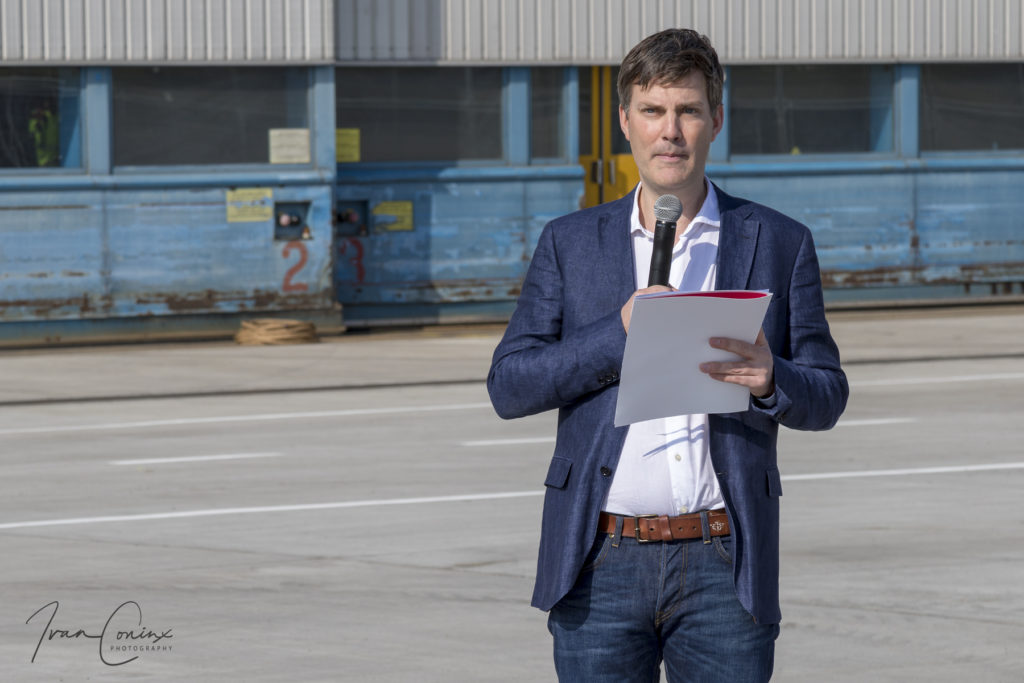 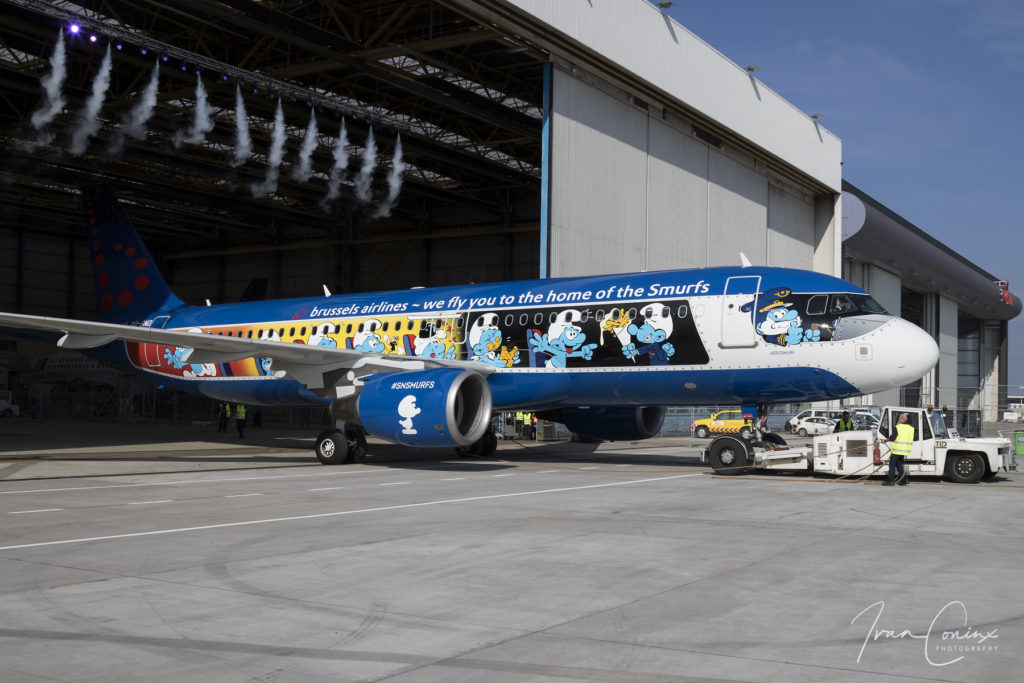 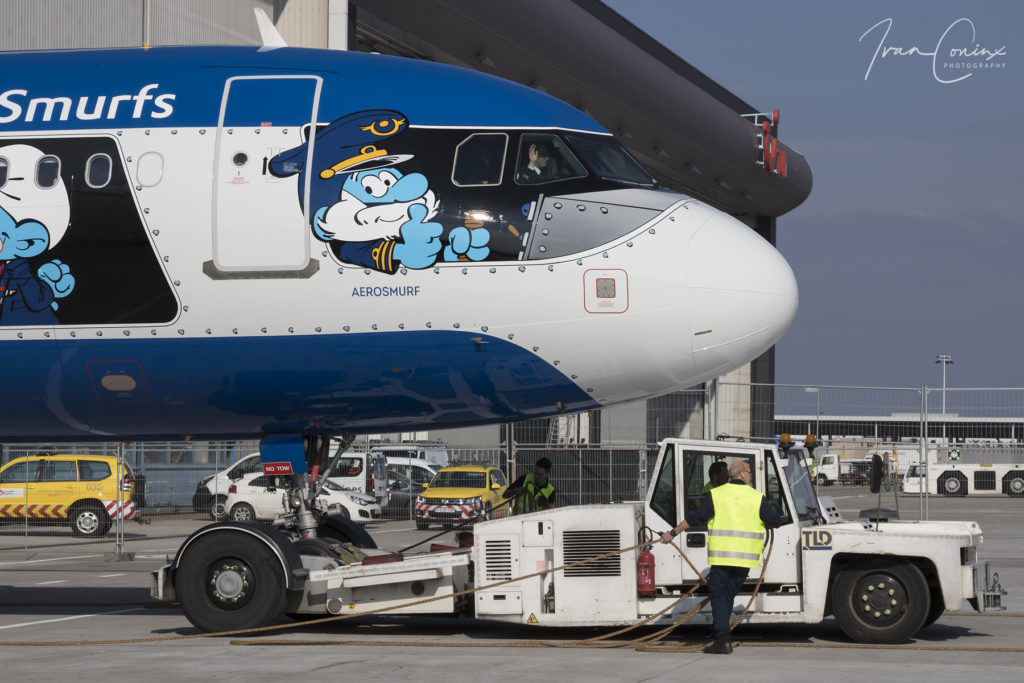 The name Aerosmurf is the title of a Smurfs comic album which tells the story of a little Smurf whose dream is to fly. The little Smurf tried several ideas, but none of them work, until he builds a plane. Since then, the little Smurf is known as Aerosmurf. 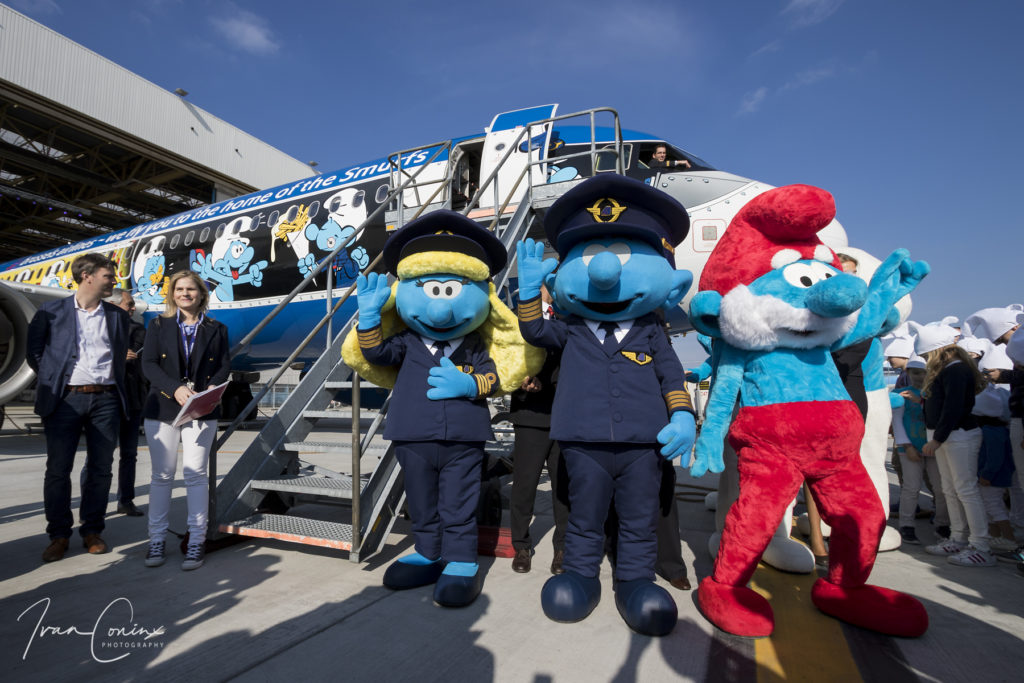 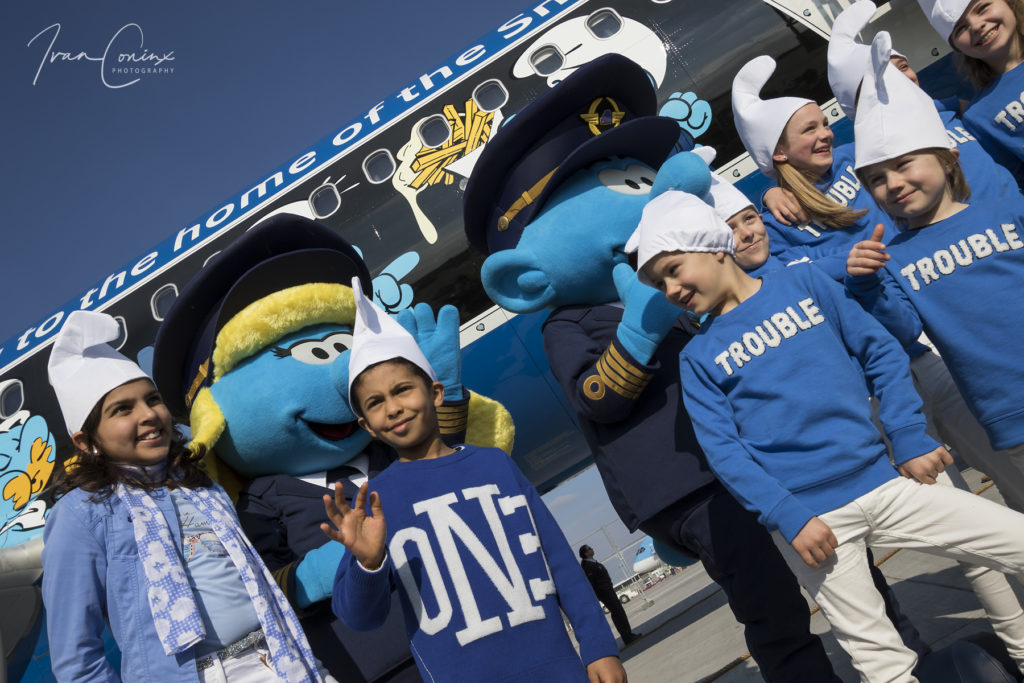 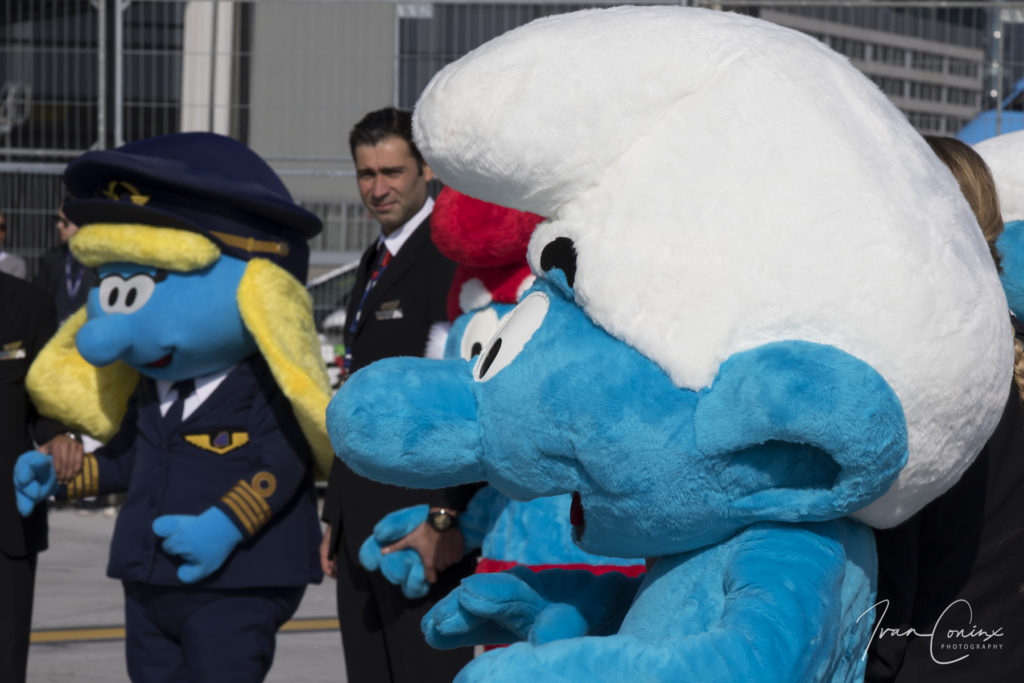 Tanguy Cartuyvels, VP Marketing at Brussels Airlines, said: “To design our fifth Belgian Icon, we wanted to ask the public who they wish to see flying through the skies as an ambassador for Belgium. That’s why we launched a contest last year to which everyone with a heart for Belgium, every enthusiast and every designer could participate by sending in their idea or plane design. And we received an overwhelming amount of ideas, from fries to the saxophone.”

Véronique Culliford, Peyo’s daughter and president and founder of IMPS, added: “It is an honor to see the Smurfs representing our country as a Belgian Icon, and a fantastic way to celebrate their 60th birthday. My father would be proud to see Aerosmurf taking to the skies.” The designers of studio Peyo adapted Marta’s design to fit the round fuselage of an aircraft. The result is a plane with 19 smurfs, passengers as well as crew, interacting with each other. In the cockpit we find Smurfette as the captain and Papa Smurf as co-pilot. The design contains Belgian details, representing the many other ideas that were submitted during the contest. On the left hand side Harmony Smurf is playing the Belgian national anthem on the saxophone – a Belgian invention – together with another smurf who is playing the harmonica, referring to the famous Belgian musician Toots Thielemans. On the crew smurf’s trolley we find a miniature Atomium. On the right side of the plane a crew smurf is serving Belgian fries and waffles to the smurf passengers. Aerosmurf also has two secret passengers, Gargamel and Azrael, trying to escape through a hatch in the belly of the plane. 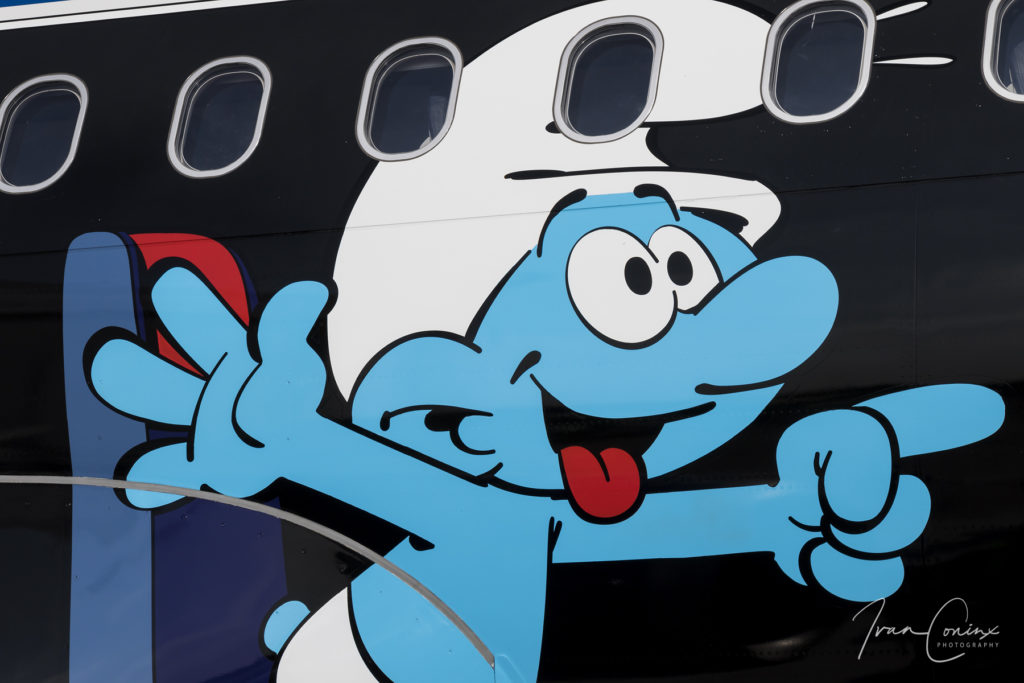 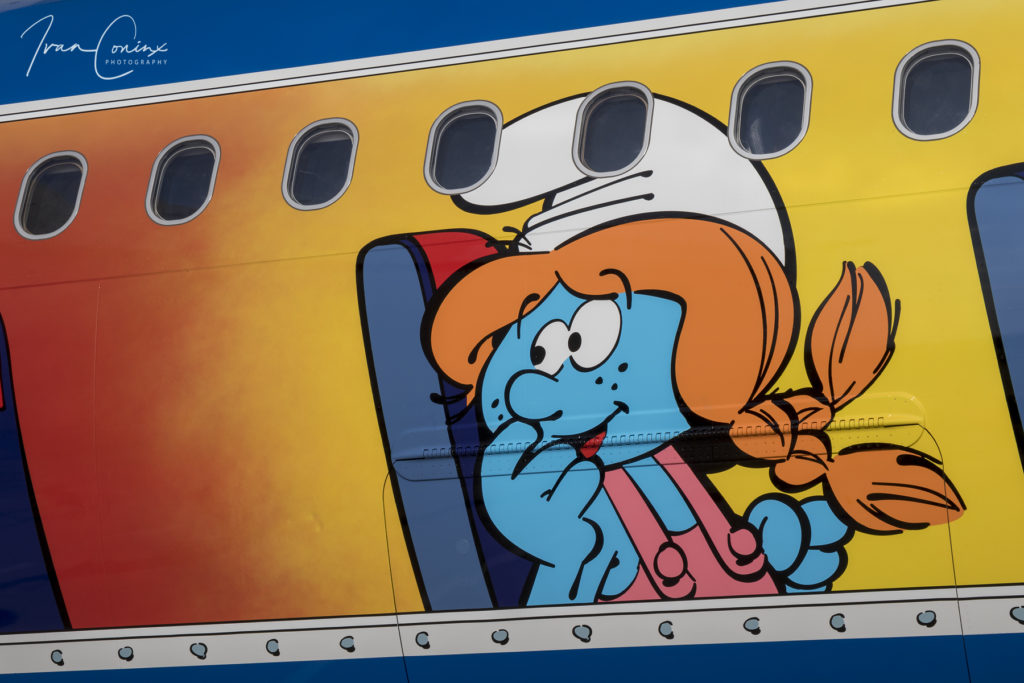 For passengers flying with Aerosmurf the experience continues inside. Little smurf footsteps on the carpet are leading the Aerosmurf guests to their seats, while a Smurfs video and adapted boarding music complete the Smurfs experience. 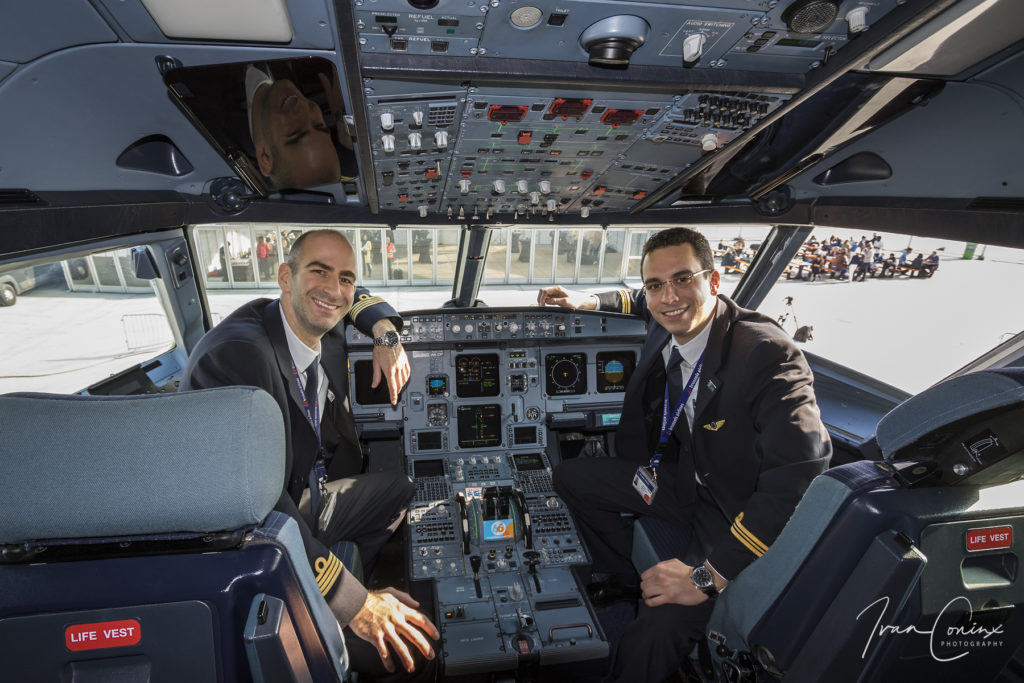 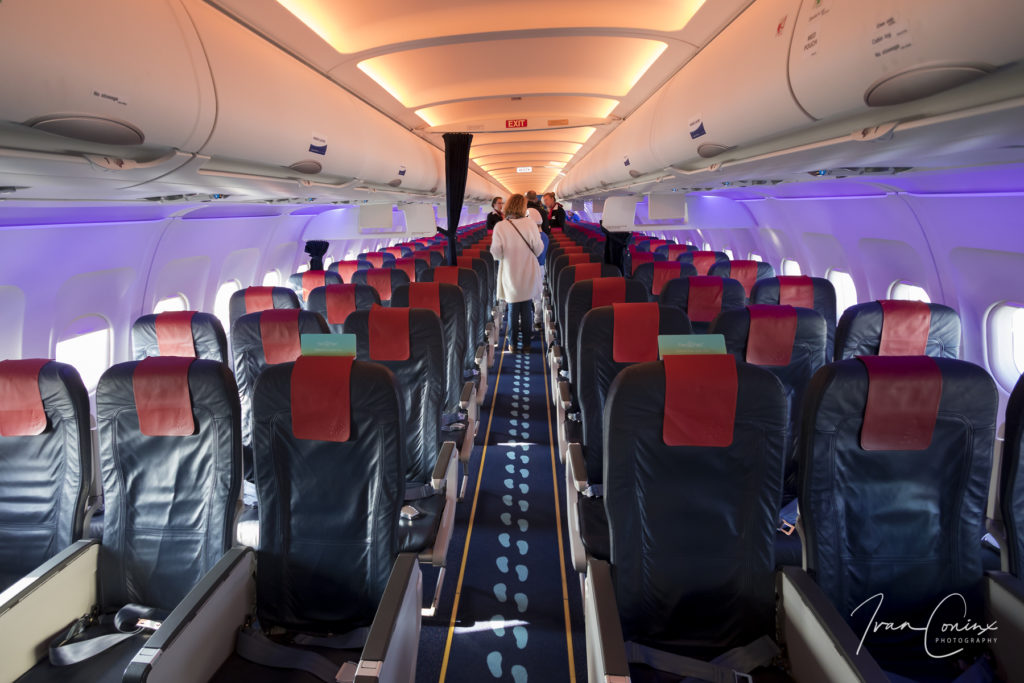 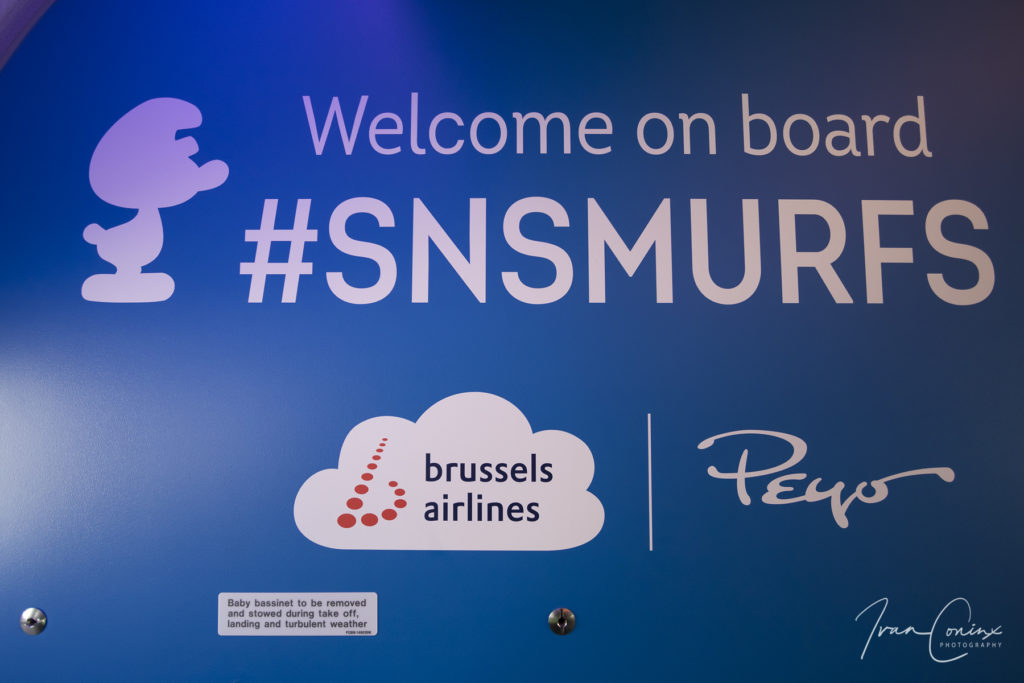 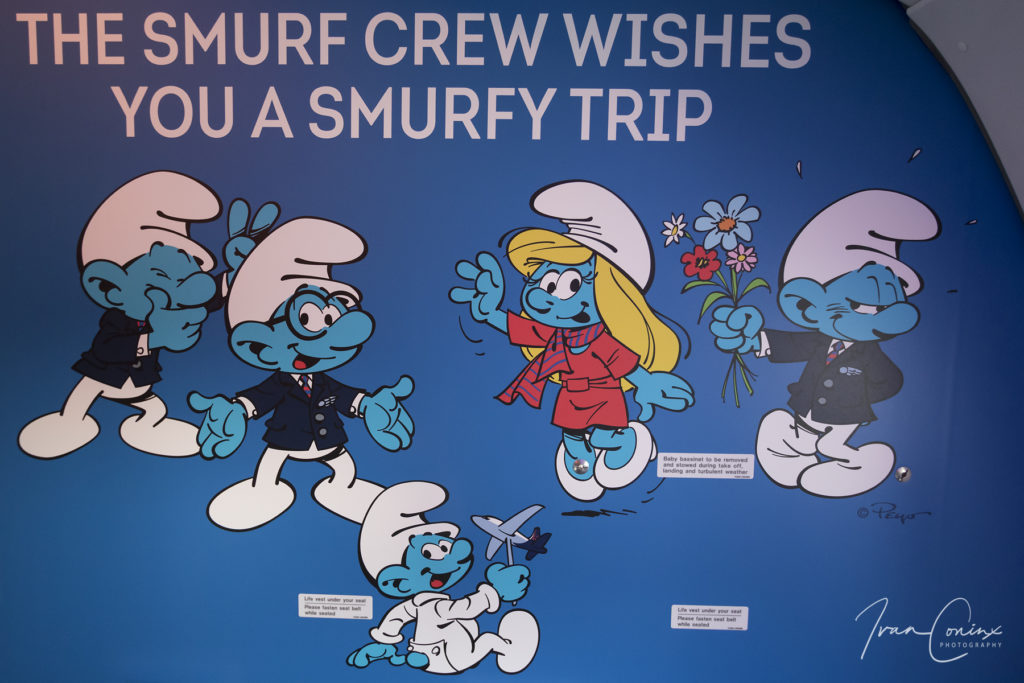 Led by airbrush specialist André Eisele, 14 artists worked 14 days non-stop to paint the eleven meters high and 37.56 meters long design on the plane by hand. They used 28 colors, 420 liters of paint, 24,000 meters of masking tape and 4,500 m² masking paper. Aerosmurf will be part of the Brussels Airlines fleet until 2023.

As the winner of the contest, Marta Mascellani followed the plane’s creation process behind the scenes. Saturday she stood on the front row at the revealing of the aircraft and Sunday Aerosmurf took Marta home to Milan, with in the cockpit her brother Lorenzo, who is a pilot at Brussels Airlines and also her personal connection to Belgium. 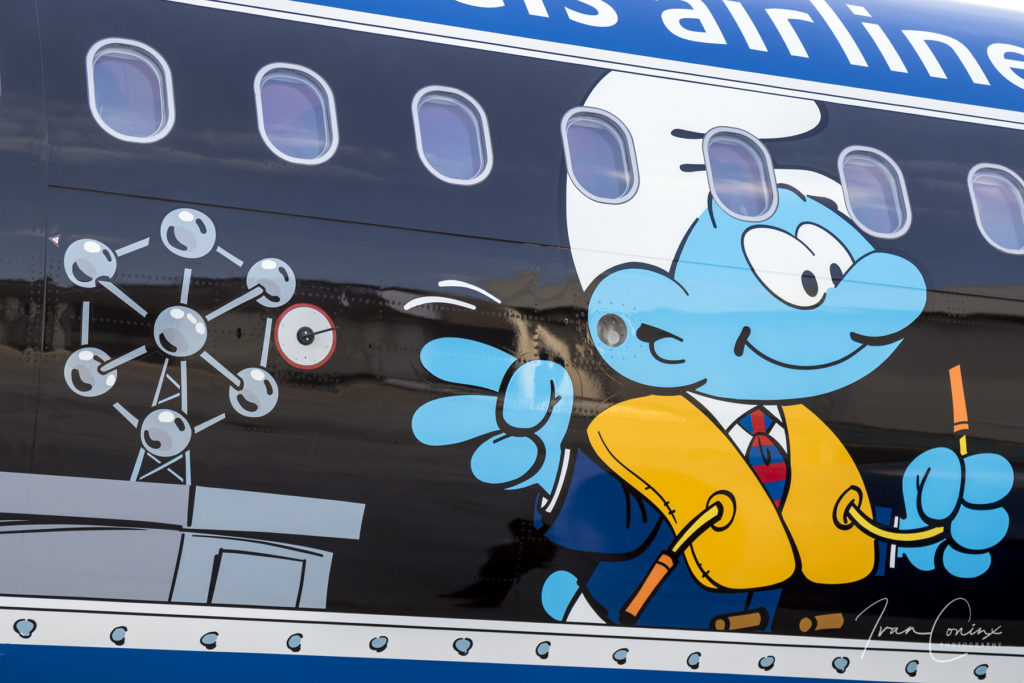 Marta Mascellani, designer of Aerosmurf, said: “It is amazing to see how they really made my design come alive. Drawing is a passion of mine and seeing my design on a plane that will fly around Europe is a wonderful way to share that passion with the world.”

Hi-res versions of these photos, as well as many, many more photos are available here.