On Tuesday 30 November 2021, the 20th Squadron Tactical Airlift sent out a communication to enthusiasts and spotters that, in cooperation with the 15th Wing Air Transport, it would organise a small event including a farewell flight, to pay a tribute to the Lockheed C-130H Hercules. Between 13:00 and 17:00 participants would have to be present on the tarmac for departure and arrival of the farewell flight. They would also be able to take pictures of the C-130 aircraft from a close range, receive the C-130 farewell patch, be able to talk to both Belgian Air Force and foreign C-130 crews and even be able to take pictures of arrivals and departures of civil aircraft (Melsbroek Air Base is located on the northern side of Brussels Airport).

Immediately after I received the announcement in my inbox, I enrolled and hoped to be allowed. Unfortunately, few days later I got a message that I did not make it on the list of participants and that I had been put on a waiting list. Too bad, but as the saying goes, you can’t win them all. Nevertheless, I was looking forward to the day and hoping to get some nice final photo opportunities and to say farewell to this iconic aircraft.

On Monday 13 December 2021, the Belgian Air Force published an official schedule and routing of the planned farewell flight on Friday 17 December 2021. A formation of seven Lockheed C-130 Hercules transport aircraft would take off from Melsbroek Air Base at 13:00 LT (local time / GMT + 1) and fly via multiple waypoints to many airport, airfields and air bases in Belgium where the aircraft would do a low level flyby, such as Ursel Air Base, Ostend Airport, Koksijde Air Base, Florennes Air Base, Saint-Hubert Airfield, Beauvechain Air Base, Kleine Brogel Air Base and Antwerp Airport. The formation would arrive back at Melsbroek Air Base at 15:45 LT. 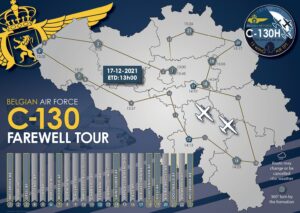 Almost exactly one year ago, on Friday 18 December 2020, the Belgian Air Force had retired its Lockheed C-130H Hercules CH-09 and operated a final flight in almost perfect meteorological conditions, allowing spotters and enthusiasts to get some very nice photos of the final flight of CH-09. 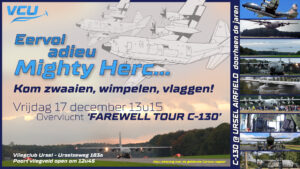 As the week progressed, the meteo forecast for Friday 17 December 2021 became more and more unfavourable. Cloud base was expected to be very low and visibility would probably be limited due to fog. On Thursday 16 December, the weather was much nicer at  Melsbroek Air Base than initially anticipated, so some probably began to hope for some nice weather on Friday too. Unfortunately, this was not the case.

On the morning of Friday 17 December 2021 at 09:50 LT, these were the valid METAR and TAF for Brussels Airport:

Just before 10:00 LT, the Belgian Air Force announced via social media that the planned farewell flight had to be cancelled due to unfavourable meteorological conditions. “Safety First”, said Senior Captain Kurt Verwilligen of the Belgian Air Force. “It would be irresponsible to to let these multiple aircraft fly so close to each other today. Safety comes first, at all times.” he continued. Hence, the Belgian Air Force quickly had to arrange for an alternative flying programme. Instead of a ‘tour of Belgium’ with all aircraft, three aircraft would each operate their own flight in a different direction. The final flight plan was announced via social media at around 10:30 LT. Due to the unfavourable meteorological conditions, I was unable to make any decent photos of these farewell flights. 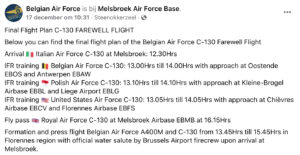 Members of the press who attended the event were eagerly waiting for a seat on the cancelled farewell flight. However, they all got a second chance to spend an hour between the clouds as a Belgian Air Force Lockheed C-130H Hercules took off for a flight and joined an Airbus A-400M Atlas. Both aircraft set course for Florennes Air Base for some low level flyby’s. When the C-130 arrived back at Melsbroek Air Base it got the traditional water salute by the fire department.

In 1970, the Belgian Government ordered twelve C-130H Hercules transport aircraft from Lockheed to replace the ageing Fairchild C-119 Flying Boxcar. All twelve aircraft would be delivered between 1972 and 1973. The first Belgian Air Force Lockheed C-130H Hercules landed at Melsbroek Air Base on Tuesday 25 July 1972. The other eleven remaining C-130’s were delivered between July 1972 and April 1973. Two years later, the Fairchild C-119 Flying Boxcar was withdrawn from use in the Belgian Air Force. 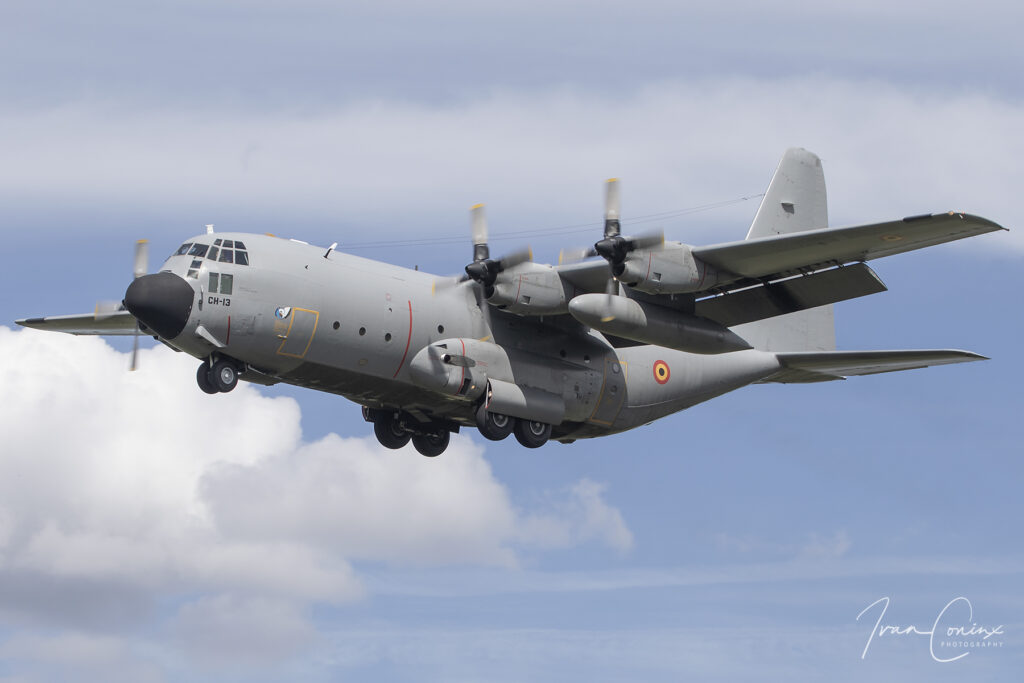 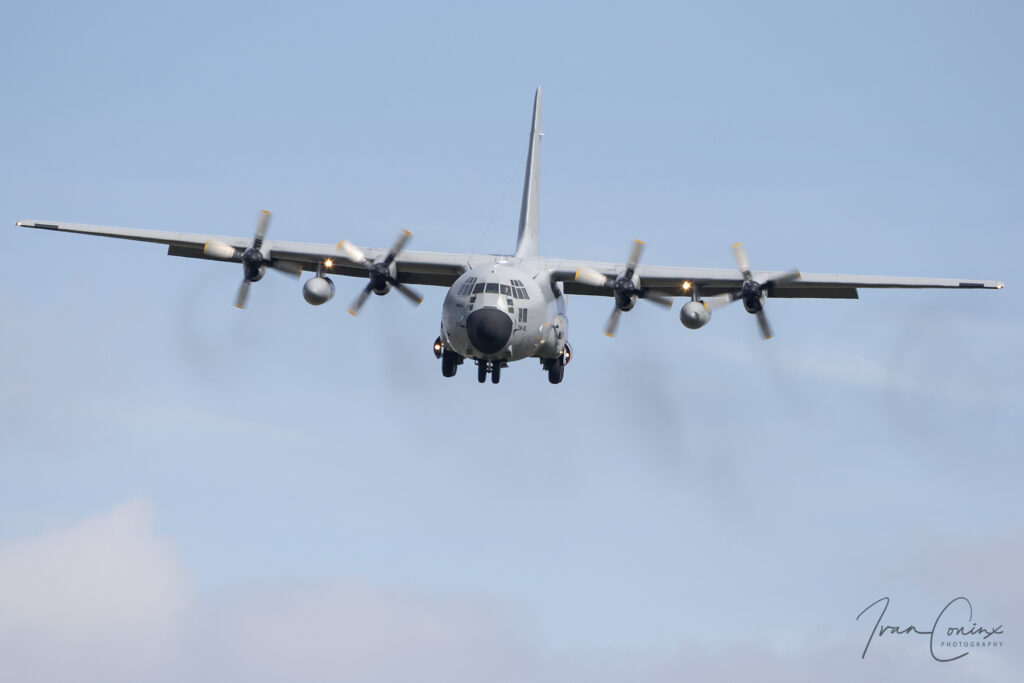 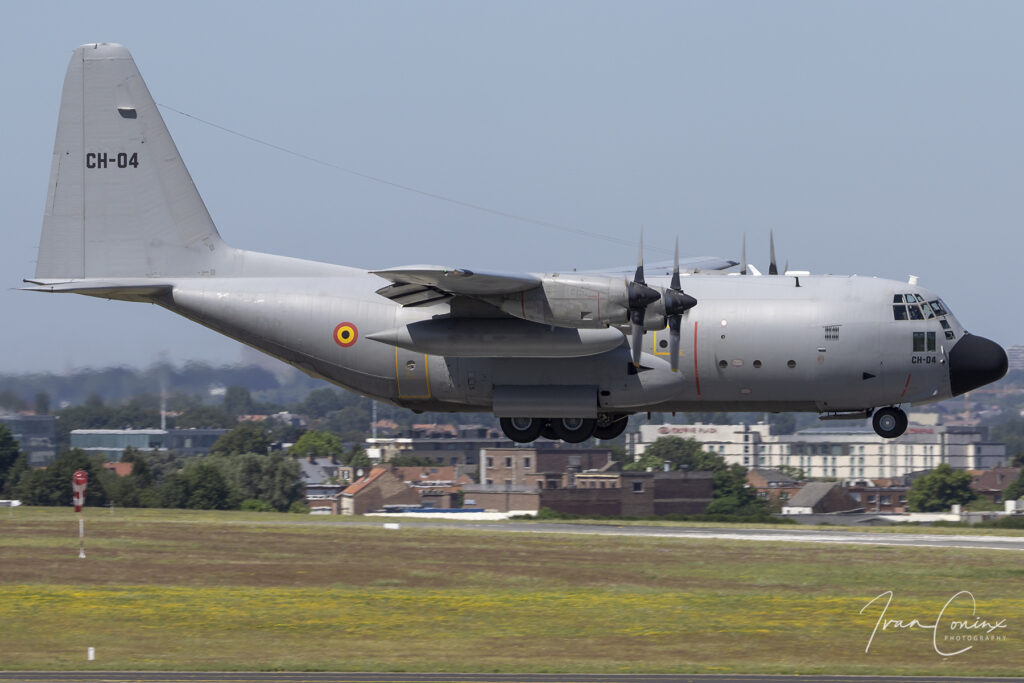 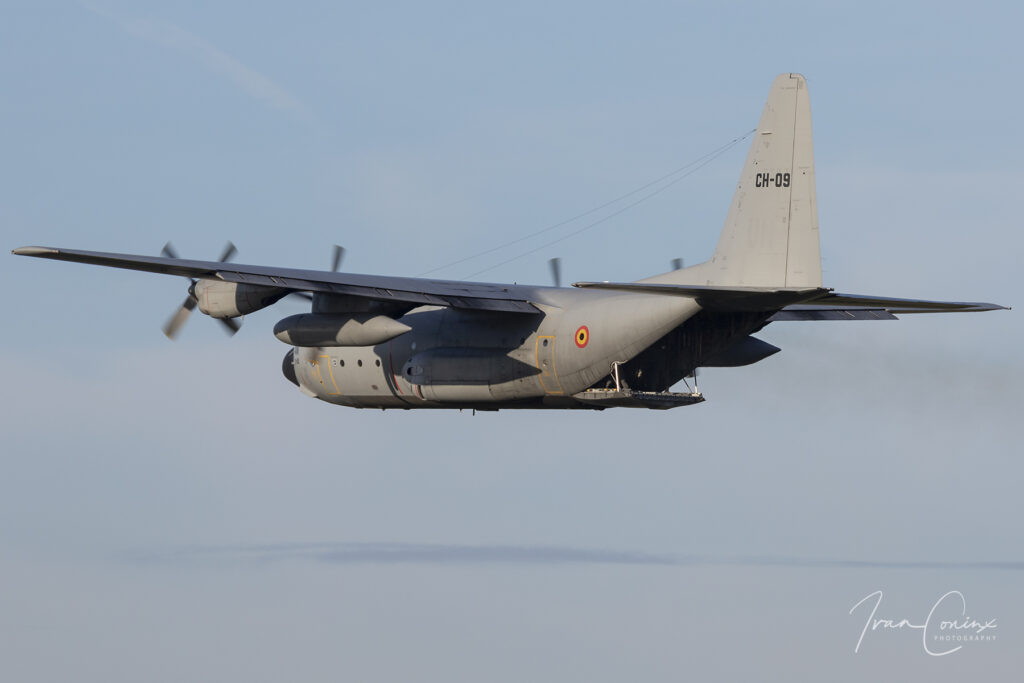 In early 2007, the Belgian Government ordered one additional (used) Lockheed C-130 Hercules from Evergreen International Airlines. The aircraft was refurbished and delivered to the Belgian Air Force on Tuesday 17 March 2009 as CH-13 (initially it was registered as CH-14).

The Belgian Air Force Lockheed C-130H Hercules transport aircraft have been used in more than fifty international peace and security operations. “The C-130 was the first to arrive and the first aircraft to operate each mission. Without air transport, operations in foreign countries cannot take place and they are of utmost importance to ensure the safety of our Belgian citizens.” explained Major Guy Bodet, Squadron Commander of the Belgian Air Force C-130 Maintenance Squadron.

The final mission was operation Red Kite where more than 1,400 citizens were evacuated. A total of three Belgian Air Force Lockheed C-130H Hercules transport aircraft operated more than twenty flights between the airports of Islamabad (Pakistan) and Kabul (Afghanistan). The C-130 was also used in the recent ‘Tropical Storm’ exercise in Gabon. 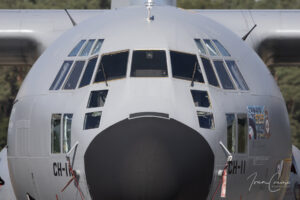 CH-11 on static display at Kleine Brogel in September 2019.

Each Belgian soldier who has ever been on a mission has a special connection with the C-130. It guaranteed both the supply of rations as well as souvenirs from home. Its wings also brought relief and symbolised the end of a long mission abroad.

During its career of almost fifty years, the Belgian Air Force Lockheed C-130H Hercules transport aircraft fleet carried 150,000 tonnes of cargo, travelled a total distance of more than 3,900 times around the world in 285,000 hours and made 199,500 landings. 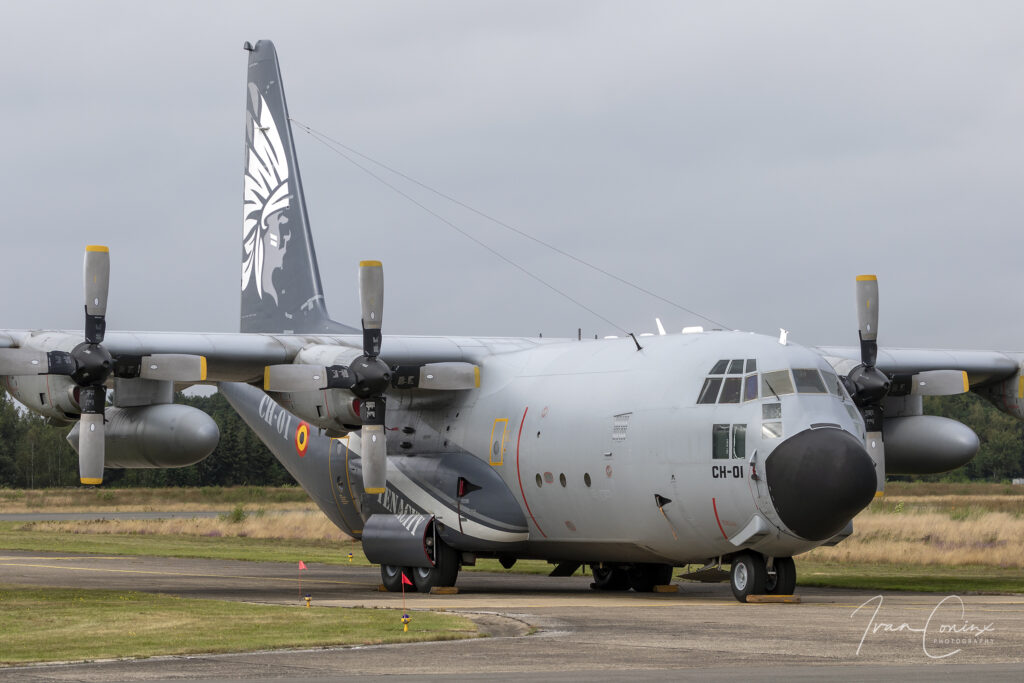 CH-01 on static display at Kleine Brogel in September 2021. 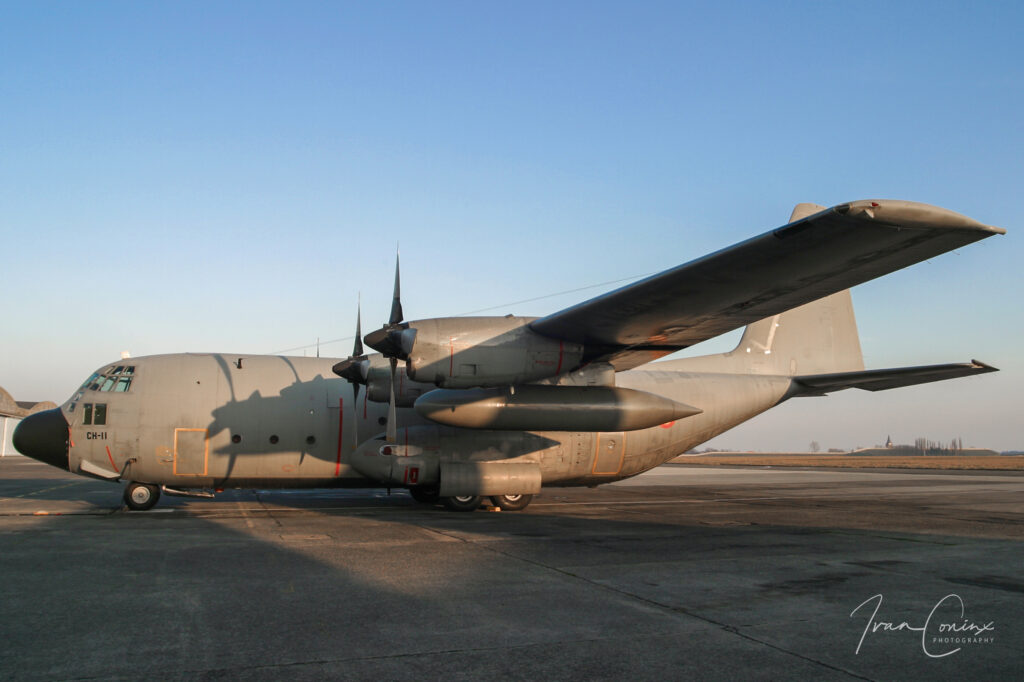 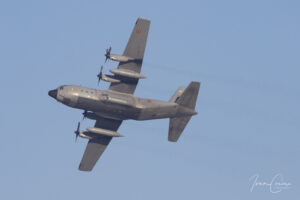 So long ‘Mighty Herc’ and thanks for your loyal service. You will be missed!